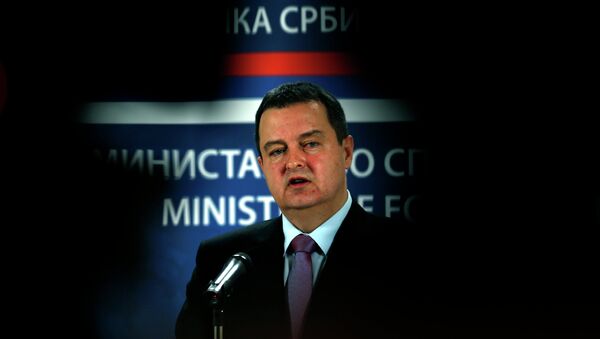 Serbian Foreign Minister Ivica Dacic said that Serbia is ready for dialogue with Kosovo, but Belgrade is not ready for ultimatums to be imposed on Serbia.

"Currently the Serbian prime minister is in talks with Kosovo's new prime minister. I hope we will be able to take a step forward. It is not about Kosovo's independence but about normalizing the relationships," Dacic said.

Belgrade's relations with Pristina have been one of the concerns regarding Serbia's accession to the European Union. However, both sides have said that Serbia's recognition of Kosovo should not be an obligation.

The War on Yugoslavia: The Real Face of American ‘Diplomacy’
"We are ready for a dialogue, but we are not ready for ultimatums to be imposed on us," Dacic said, when asked about the accession negotiations.

Kosovo declared independence from Serbia in 2008 and is recognized by 108 UN member states, while Serbia considers Kosovo to be part of its territory. Dozens more countries, including Russia and Spain, do not recognize Kosovo as an independent state.