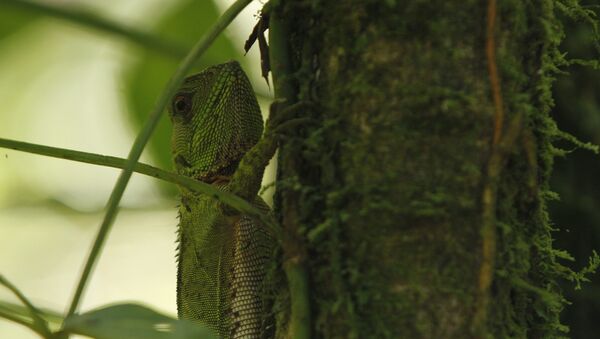 Researchers have discovered three new species of woodlizard, among the largest and most colorful lizards in South American rainforests.

New Study Reveals Social Life of Giant Pandas
A team of researchers working in Peru and Ecuador have announced the discovery of a new species of Enyalioides, a dragon-like genus of lizards which is among the largest in the Amazon rainforest, where they grow up to seven to 15 centimeters long.

The discovery of Enyalioides altotambo in northwestern Ecuador, Enyalioides anisolepis along the Amazonian slopes of the Andes in southern Ecuador and northern Peru and Enyalioides sophiarothschildae from the Cordillera Central in northeastern Peru brings the number of known woodlizards to 15.

Also known as 'dwarf dragons,' Enyalioides are diurnal, meaning that they are active during the day and sleep at night, and are among the most colorful lizards in the tropical rainforest.

The most recently discovered animals differ from others in the genus by their color and the pattern of their scales, which led the scientists to believe they had found a new species; their suspicions were later confirmed by DNA analysis.

The discovery forms part of a rapid expansion in the documentation of the genus in recent years, the scientists wrote in a research article published on Monday in the journal Zookeys, explaining that "woodlizards represent one of the South American lizard groups with the highest species discovery rate [corrected for clade size] in the last decade."

"This is a striking fact, given that woodlizards are among the largest and most colorful lizards in South American tropical forests and is most likely the result of recent fieldwork in poorly explored areas of the central and northern Andes."

Rare White Tiger Cubs at Hungarian Zoo
According to a statement from researcher Omar Torres-Carvajal, part of the team who carried out the field and laboratory work, the discovery challenges the notion of woodlizards as a species with less-than- average diversity.

In 2006, said Dr. Torres-Carvajal, when he started working with woodlizards, "only seven species of woodlizards had been described, and they were recognized in the literature as one of the less diverse groups of South American lizards."

"During the last few years we doubled the number of known species of woodlizards, showing that the diversity of these conspicuous reptiles had been underestimated. That more than half of the diversity of a group of large, dragon-looking reptiles from South America has been discovered in recent years should be heard by people in charge of conservation and funding agencies," Torres-Carvajal said.