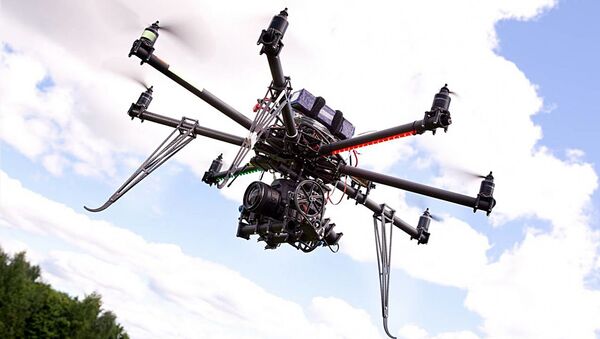 "We have purchased five drone cameras with capacity of lifting two kilogram weight. They can be used to shower pepper powder on an unruly mob in case of any trouble," Senior Superintendent of Police Yashasvi Yadav told the Press Trust of India, adding that the drones also will assist in tracking criminals.

The small, unmanned aircraft are already used to capture images in sensitive parts of the city.

The police deployed unarmed drones for aerial surveillance last summer during riots that caused the deaths of three people and at least 12 injuries.

While Lucknow Police would be the first in the country to own drones – they previously rented the aircraft – India is not the first to consider using drones for crowd dispersal or suppression.

In 2014, drone maker Desert Wolf sent its Skunk Riot Control Copter to Turkey and South Africa to potentially be used to quell dissent.

According to Desert Wolf, the drone is equipped with four paintball barrels that each can fire up to 20 paintballs per second and 80 pepper balls per second that are capable of “stopping any crowd in its tracks.”

The drone can hold up to 4,000 balls at a time and has a high-pressure carbon fiber air system that “allows for real stopping power,” according to Desert Wolf.

In 2012, a Texas sheriff’s department used a US Department of Homeland Security grant to buy a $300,000 Vanguard Shadowhawk drone. It was deployed for surveillance purposes, but the department’s chief expressed interest in using the drone’s weapons platform, which included rubber bullets, Taser and tear gas.

Two years earlier, Vanguard told an Ohio police lieutenant that it was indeed capable of mounting a “grenade launcher and/or 12-gauge shotgun” on its Shadowhawk.