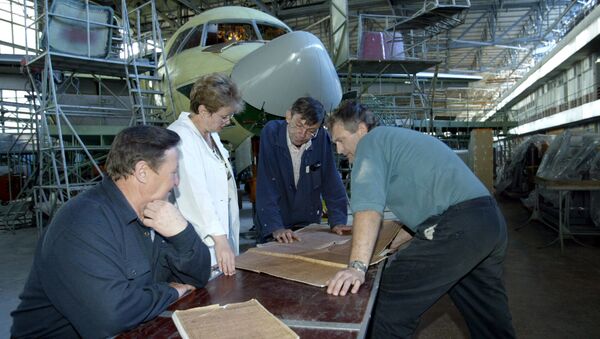 © AFP 2022 / SERGEY SUPINSKI
Subscribe
Workers of the Kharkov Aviation Factory, known for the production of the legendary Antonov brand aircraft, have been staging demonstrations throughout the week, with 400 gathering on Monday to demand the timely payment of wages, Ukrainian television has reported.

The wage arrears in question, going back to August, 2014, amount to at least 43 million hryvnia, equivalent to about $1.8 million US.

The protest was later split into two demonstrations, some of the workers entering the factory yard to speak with company and government officials, while others stayed at the entrance to the plant. Some of the workers noted their readiness to halt traffic in the city's central street in order to attract public attention to their difficulties. This is the third protest action conducted by factory workers in a week.

One worker noted in desperation: "We are being crushed by utilities rates, and they refuse to pay us. What they give us is an indulgence, not a living wage. People are simply being crushed."

Ukrainian President Combats Unemployment With Military Jobs
Another explained the situation: "They haven't paid us in eight months. People have simply run out of patience. The management earns between 15-20,000 hryvnia ($640-850), while a skilled machine tool worker gets 1,800 ($75)…We are given promises, but nothing is done. They tell us to wait two, three weeks, but we see nothing. How much longer can we be expected to tolerate this?"

Kharkov Regional Government Representative Mark Bekker promised that a complex of measures would be taken, including return of 9.8 million hryvnia worth of state funds, which would help pay back owed wages. Union officials negotiating with workers promised that one month's worth of arrears would be paid soon, with further payments to be made later this month.

Ukrainian Economy Suffers 15% Drop in GDP in First 100 Days of 2015
Last Friday, company General Director Anatoliy Myalitsa was fired as part of Kiev's lustration campaign against former Yanukovych government officials. Before that the plant's operation had been halted for several months. Ukrainian newspaper Segodnya reported that the plant's workers now worry that the troubled factory will lose all its remaining orders. The Ukrainian aerospace industry, already ailing since the collapse of the Soviet Union, has been dealt a further blow by the loss of economic and technical ties to Russia last year following the events of Maidan.

The Kharkov Aviation Factory, Founded in 1926, once served as one of the world's largest aviation enterprises, producing thousands of passenger, transport and military aircraft, including the legendary Antonov brand.