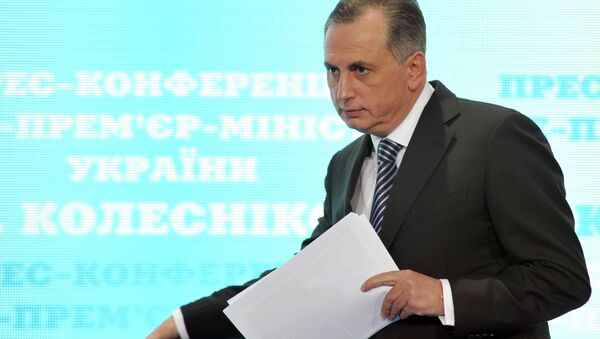 Embattled Ukrainian PM Fires Official Who Investigated Him for Corruption
The Opposition Bloc is a parliamentary group composed mostly of former MPs of the former ruling Party of Regions, deposed by the Maidan coup. Asked whether the creation of the shadow government signifies an attempt to get back at the present government, Koselnikov asked "What is meant by getting even? If the dollar-hryvnia exchange rate is 8-1, is this considered getting even? If so, we want this form of getting even. If wages in Kiev [before Maidan] were equal to $650, $550 in Donetsk and $450 across Ukraine, then yes, we want this kind of getting even. The people must be asked: do they want such a revanche in the economy. I think the answer is obvious."

Kolesnikov noted that his party envisions, first and foremost, peace in the Donbass. "There cannot be any stability without peace," the politician noted. The shadow PM added that ending the war in eastern Ukraine will end the unnecessary death and suffering among both civilians and Ukrainian servicemen, and that "this matters more than anything." He also promised that peace will result in the reinvigoration of Donbass, with people being paid wages and pensions, taxation returning to normal, all of which will stabilize the hryvnia's exchange rate.

Just as important, according to Kolesnikov, is the "constitutional strengthening of peace initiatives…The main task is to move power closer to the people, to give it to the people; to take authority from the center and give it to the regions. If Donbass today needs this to ensure peace, it must be done. But this is only the first step. All the country's regions must have equal powers. Only this will prevent corruption." The politician noted that another immediate task would be to reduce unnecessary expenditures in the civil service, spending for which presently amounts to 60 billion hryvnia ($2.55 billion US) and to transfer this money to the social sphere.

"Ministries have a thousand or more people, [among them] the ministry of Finance, the Ministry of Economy. Regional administrations have up to a thousand people each. What decisions do they make? If they were to be closed, believe me, Ukrainians wouldn't notice that they are gone for at least 20 years."

Ukraine Rushes to 'Ban Communism' in Time for Anniv. of Victory Over Nazism
Kolesnikov also stepped out for the opening of markets, saying they should be "open to the whole world." The politician noted that "everyone wants to have the living standards enjoyed in the EU. But the EU has been traveling toward achieving this level of wealth since 1948-49, and somewhere up to the mid-1980s. Taxes were low, a common market existed…and markets were open. We must open markets to the European Union, to the Eurasian Customs Union, and most importantly, to North America and Southeast Asia."

Ukraine's so-called shadow cabinet, composed of MPs from the Opposition Bloc, was formed late last month. Opposition Bloc Vice Chairman Oleksandr Vilkul stated that "the government in office is absolutely incompetent," and that "guided by European practice, we are shaping an opposition government that will draft bills and propose steps to overcome the crisis and protect Ukrainian citizens."

With 29 seats in Ukraine's 423 seat parliament, the Opposition Bloc is considered by political experts to be among the last political forces opposed to Kiev's present pro-war course following last year's parliamentary elections.