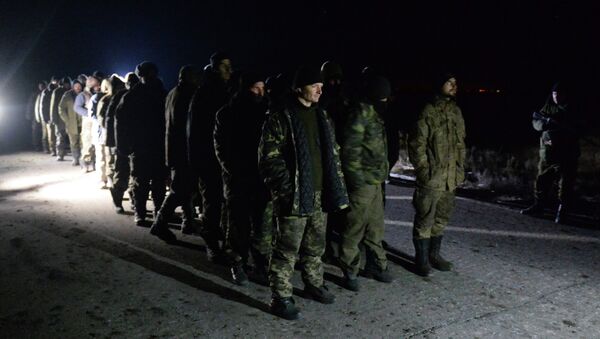 © Sputnik / Mikhail Voskresenskiy
/
Go to the photo bank
Subscribe
Negotiator for the self-proclaimed Donetsk People's Republic said that exchange of prisoners between the Kiev forces and the independence supporters of Donbas will be suspended until the issue of the establishment of working groups on the implementation of the Minsk agreements is solved.

Ukraine Prisoner Exchange Expected to End in March, Defense Ministry Says
DONETSK (Sputnik) – The exchange of prisoners between the Kiev forces and the independence supporters of Donbas will be suspended until the issue of the establishment of working groups on the implementation of the Minsk agreements is solved, a negotiator for the self-proclaimed Donetsk People's Republic (DPR) said Sunday.

In mid-February, the leaders of Russia, France, Germany and Ukraine hammered out a deal in the Belarusian capital of Minsk aimed at ending the military conflict between Kiev forces and the independence supports of eastern Ukraine.

The deal reached in Minsk envisaged a ceasefire, the withdrawal of heavy arms from the line of contact in Donbas, an all-for-all prisoner exchange and certain amendments to Ukrainian constitution.

It also stipulated the establishment of the working groups on the implementation of relevant aspects of the Minsk agreements. According to the point 13 of the new Minsk deal, the composition of these units must reflect that of the Trilateral Contact Group.

“Prisoner exchange has to be suspended until an official decision is taken regarding the personal composition of all of the working groups on the implementation of the Minsk agreements,” Denis Pushilin said as quoted by Donetsk news agency.

Pushiling added that there should be a total of four groups: on economy and recovery, on refugees and humanitarian assistance, on constitutional reform and elections and on security.

The DPR negotiator said that the working group on refugees and humanitarian assistance should handle the prisoner exchange and help resolve the current differences regarding the numbers of captives to be exchanged and the order of such swaps.

The conflict in Ukraine’s southeast started in April, 2014 when Kiev launched a military operation to suppress independence supporters of Donbas. According to UN estimates, the conflict claimed more than 6,000 lives.