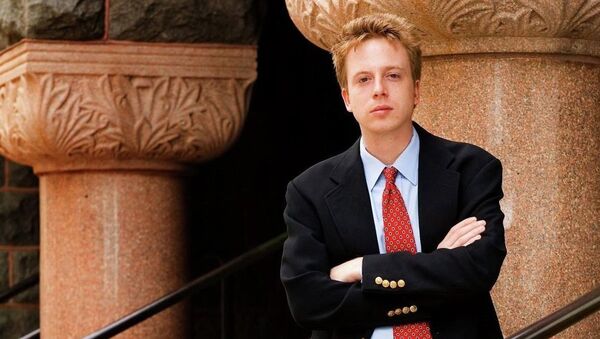 © facebook.com/freebarrettbrown
Subscribe
Incarcerated journalist Barrett Brown, who is serving five years in prison for links to hacker group Anonymous, had his email suspended after contacting another reporter about an alleged wrongdoing by the Bureau of Prisons.
Barrett Brown, whose email activity has been suspended until April 2016, said he found out about the restriction an hour after reaching a journalist and had been given no explanation for the move.  He had also been in touch with The Intercept’s Glenn Greenwald regarding a possible writing stint with the publication.

WikiLeaks’ Assange Expresses Support for US Journalist Accused of Hacking
According to Bureau of Prisons policy, inmates are allowed access to the TRULINCS e-mail system with certain limitations.
Inmates may send electronic messages to securely, efficiently and economically maintain contact with persons in the community. … [but] the CEO prohibits or discontinues its operation, or individual inmates' participation, whenever it is determined to jeopardize the safety, security, or orderly operation of the correctional facility, or the protection of the public and staff,” the policy reads.
According to a Barrett support group, however, the Bureau of Prisons violated its own policy by terminating Barrett’s email access.
“This is contrary to the BOP’s own policy on several points, as noted in their 2009 documentation – the administration is only allowed to remove access to TRULINCS for thirty days pending an investigation of any potential misuse, and the inmate is supposed to be informed in writing of the reason for that,” the group said in a statement.
Brown was initially charged with fraud after sharing stolen credit card information about members of the intelligence contractor Stratfor. He was also ordered to pay nearly $900,000 in fines and restitution. These charges were dropped after he accepted a plea deal in April 2014.

US Hacktivist Pursued by FBI for Exposing Illegal Operations
Brown pleaded guilty to threatening an FBI agent in an online video and providing a link to data which had been stolen from the private intelligence group Stratfor, which was hacked by Anonymous in 2011.
Brown, a freelance writer for The Guardian, Vanity Fair and Huffington Post, faced over 100 years in prison, prior to accepting a plea bargain.
The link that Brown shared contained confidential emails and credit card information that had already been hacked by someone else. Brown said he was unaware of the credit card information it contained but pleaded guilty to being an accessory after the fact for sharing the link with a hacker, and for hiding computers from the FBI agents who searched his home.
Brown has already served 31 months of the sentence, and is being sentenced to another 35 according to the Guardian, as well as $890,250 in restitution payments and $225 in fines.
000000
Newsfeed
0
New firstOld first
loader
LIVE
Заголовок открываемого материала
Access to the chat has been blocked for violating the rules . You will be able to participate again through:∞. If you do not agree with the blocking, please use the feedback form
The discussion is closed. You can participate in the discussion within 24 hours after the publication of the article.
To participate in the discussion
log in or register
loader
Chats
Заголовок открываемого материала
Worldwide
InternationalEnglishEnglishMundoEspañolSpanish
Europe
DeutschlandDeutschGermanFranceFrançaisFrenchΕλλάδαΕλληνικάGreekItaliaItalianoItalianČeská republikaČeštinaCzechPolskaPolskiPolishСрбиjаСрпскиSerbianLatvijaLatviešuLatvianLietuvaLietuviųLithuanianMoldovaMoldoveneascăMoldavianБеларусьБеларускiBelarusian
Transcaucasia
ԱրմենիաՀայերենArmenianАҧсныАҧсышәалаAbkhazХуссар ИрыстонИронауОssetianსაქართველოქართულიGeorgianAzərbaycanАzərbaycancaAzerbaijani
Middle East
Sputnik عربيArabicArabicTürkiyeTürkçeTurkishSputnik ایرانPersianPersianSputnik افغانستانDariDari
Central Asia
ҚазақстанҚазақ тіліKazakhКыргызстанКыргызчаKyrgyzOʻzbekistonЎзбекчаUzbekТоҷикистонТоҷикӣTajik
East & Southeast Asia
Việt NamTiếng ViệtVietnamese日本日本語Japanese中国中文Chinese
South America
BrasilPortuguêsPortuguese
NewsfeedBreaking
18:33 GMTRepublicans Fear 'Civil War' in Wake of Ilhan Omar Scandal, Voice Concerns About 2022 Midterms
18:05 GMTDeath Toll From Michigan High School Shooting Rises to 4
17:05 GMTWhat Pushed Donald Trump to View US Intelligence Community With Suspicion During His Tenure
16:42 GMT'Melding of Services': Australia Won’t Lose ‘Sovereignty’ Under AUKUS, says Biden’s 'Asia Tsar'
16:42 GMTIndia's Top Car-maker Maruti Suzuki's November Sales Down 9% On Chip Shortage
16:23 GMTMassive 'Potentially Hazardous' Asteroid 'Taller Than Chrysler Building' To Approach Earth Next Week
15:38 GMTUK Parliament Reportedly on Lockdown After Man Cycles Through Security Gates - Photos
15:34 GMTUS School Shootings on the Rise After Pandemic-Caused Hiatus
15:23 GMTDominic Raab Under Pressure To Bring In UK Child Cruelty Register After Approving ‘Tony’s Law’
15:08 GMTRonaldo's Bodyguards Investigated in Portugal Over Suspicion of Illegal Work – Report
14:46 GMTAnother UK Energy Supplier Pushed Out of Market by High Gas Prices
14:41 GMTAntony Blinken: US Preparing Additional Sanctions on Belarus in Coordination With EU
14:27 GMTRussia Contracts Full Cycle Production of Sputnik V in Vietnam
14:22 GMTMeadows Claims in New Book That Trump Tested Positive for COVID Days Before 2020 Debate With Biden
14:17 GMTUS State Secretary Blinken Delivers Remarks Following Meeting of NATO Foreign Ministers
13:46 GMT'I Thought I Was the Good Guy': First Video of Alleged Capitol Rioter FBI Interrogation Released
13:36 GMTStoltenberg Holds Final Press Conference Following NATO Foreign Ministers Meeting
13:16 GMT'Hands Everywhere': Epstein Accuser Testifies Maxwell Was Present When Pedophile Sexually Abused Her
13:00 GMTUK Plans to Strengthen Cooperation With Partners on Arctic, Foreign Minister Says
12:57 GMTRival Protests in Washington, DC as US Supreme Court Hears Abortion Law Arguments