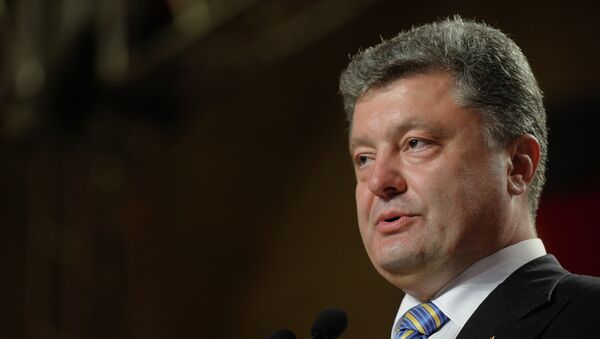 © Sputnik / Mikhail Voskresenskiy
/
Go to the photo bank
Subscribe
Poroshenko claims that the current conditions on which Ukraine purchases gas could allow the country to buy it at a lower price in the future.

KIEV (Sputnik) – The current conditions on which Ukraine purchases gas could allow the country to buy it at a lower price in the future, Ukrainian President Petro Poroshenko said Saturday.

"Nine months ago Europe and the whole world were putting pressure on us to pay $385 [per 1,000 cubic meters of gas]. Today we are paying $248…and buying as much as we need. I think the tariffs will grow lower," Poroshenko told a Ukrainian television channel.

The president pointed out that currently Ukraine was receiving more than half of the total volume of gas from the European Union, not from Russia.

Russia to Deliver Gas to Ukraine on 'Take-or-Pay' Basis - Energy Minister
Earlier this week, Ukraine signed a short-term deal with Russia to buy gas at the price of $248 per 1,000 cubic meters for the period of three months until a permanent solution to the gas issue was found.

The so-called winter package of Russian gas deliveries to Ukraine expired on March 31 but Russian authorities agreed to extend it. During the winter months, Ukraine was paying $329 per 1,000 cubic meters, which was a $100 discount from the previous price.