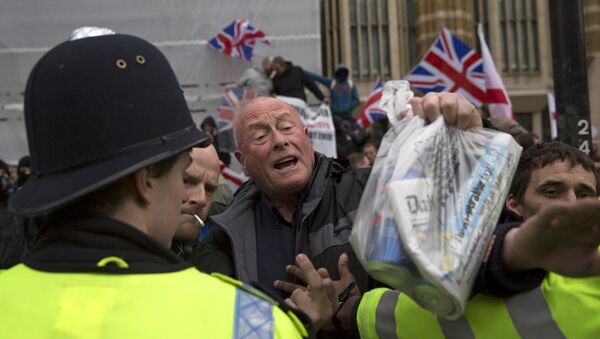 © REUTERS / Neil Hall
Subscribe
The Unite Against Fascism campaign said that the second UK rally of the German-based anti-Islamization group Pegida in London was dwarfed on Saturday by an anti-fascist counter demonstration.

MOSCOW (Sputnik) — The second UK rally of the German-based anti-Islamization group Pegida in London was dwarfed on Saturday by an anti-fascist counter demonstration, the Unite Against Fascism (UAF) campaign said.

"UAF demo outnumbers Pegida UK rabble of fascists in London. There are hundreds of anti-fascists and around 70 of the far right rabble," the broad-based pressure group UAF said in a Twitter post.

Pegida protesters, who are against immigration and what they call Islamization of Europe, marched to Downing Street in an attempt to raise awareness of a negative impact of radical Islam on the country and its lax border controls which, they say, encourage an influx of migrants.

Both protest camps traded chants and insults as they gathered at 5 p.m. local time (17:00 GMT) in central London, The Independent said. Demonstrators were separated by lines of riot police as they stood ready to intervene, but no clashes were reported.

In the first ever Pegida rally in February, scuffles broke out when up to 400 anti-Islamization protesters were met by thousands of their opponents in the city of Newcastle, in northeastern England.

Pegida has been organizing rallies in the East German city of Dresden since October 2014 where it managed to attract tens of thousands. The movement has inspired series of anti-immigration protests as far away as Canada.