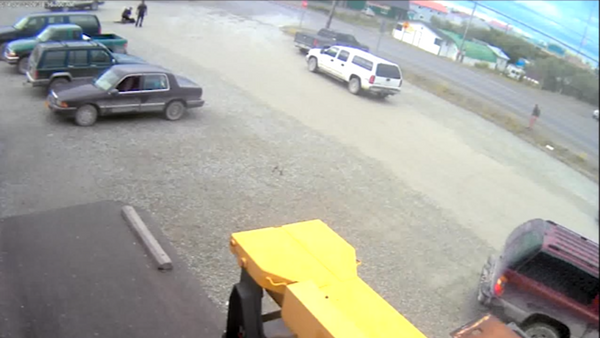 © Screen shot from video
Subscribe
Surveillance footage, which was recently made public, shows a former Bethel City Police officer repeatedly slamming a man to the ground in the parking lot of an Alaska Commercial Company store during an arrest last summer.

To Protect and to Serve? Police Brutality Rises in US
The video shot a distance from the incident on July 12, 2014, with no audio shows officer Andrew Reid forcing Wassillie Gregory to the ground. He repeatedly picks up and slams Gregory to the ground in the parking lot at least 9 times. A few people stop to watch but nobody intervenes, including another officer at the scene.

Gregory pleaded guilty to harassing Reid in exchange for having charges of disorderly conduct and resisting arrest dropped, according to KYUK. Gregory’s attorney, Sean Brown, wants to use this new evidence to pursue a motion to have the plea dropped.

Brown also wants the video delivered to the District Attorney.

“I think it is upsetting and disturbing that even as of last week I’ve received written confirmation that the Bethel Police Department had never turned this video over to the District Attorney’s Office so that the officer himself could be investigated by the Bethel DA’s office or so that charges could be considered against the officer for the actions he took against Mr. Gregory that day,” Brown told local media.

Cop Arrests Man Filming Police Brutality, Tries to Destroy Evidence (VIDEO)
According to an email delivered by an attorney for The North West Company, the parent corporation of Alaska Commercial, a store manager gave the hard drive containing the video to Bethel Police. The manager’s request to have the hard drive returned was denied. However, KYUK reports that the manager took the hard drive to someone in Bethel who was able to restore the video. That video was then turned over to Brown, who shared it with KYUK.

According to a police report, Reid approached Gregory who was “clearly intoxicated” just after 9 a.m., when Gregory started making verbal threats to Reid and challenged him to a fight.

Reid reported feeling afraid Gregory might be carrying a weapon.

The report quotes Reid as saying he tried to assist Gregory into his cruiser for protective custody when Gregory pulled away. The document also states that Reid transported Gregory to a hospital where he was cleared without injuries other than a scar on his head.

According to a transcript from the initial court hearings obtained by KYUK, an Alaska State Trooper said Gregory was hospitalized for a “dislocated shoulder” and a “possible broken collarbone.”

Bill Ingaldson, attorney for the Bethel Police Department, could not comment on the case because of ongoing personnel action involving Reid.