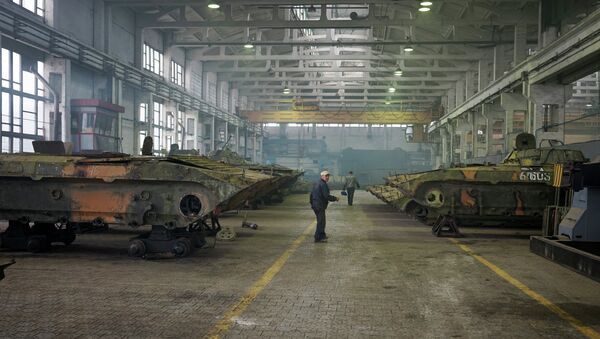 Ukraine's President promise that the job creation in the country's defense industry will combat unemployment in the crisis-stricken country.

Crimea's Growth Fastest in 20 Years Thanks to Russia, Sanctions - Minister
Ukrainian President Petro Poroshenko said on Saturday that Ukraine is creating thousands of jobs thanks to its ongoing war effort.

Employment in government-controlled areas fell by over one million people in 2014, according to Ukraine's State Statistical Service.

In February, Ukraine's state holding company for defense industries said that it plans to create 3,000 jobs in 2015.

"With tanks and armored personnel carriers we are beating back unemployment, and thousands of jobs created at defense industries are our contribution to the recovery of Ukraine's industrial potential," Poroshenko said.

Industrial production fell 21.7 percent as of February, while the production of vehicles fell 84.1 percent, with a 5.9 percent drop compared to the previous month.