24,000 People Face Evacuation From Philippines Due to Typhoon Maysak 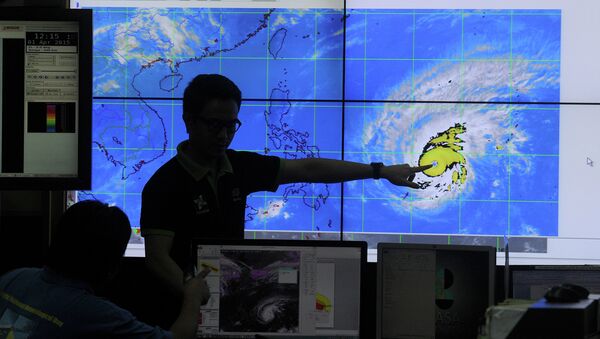 At least 24,000 people are set to be evacuated from the Philippines ahead of the arrival of Typhoon Maysak

"We plan to move people out of coastal villages," AFP quoted Nigel Lontoc, a senior civil defense official for the region, as saying.

Lontoc added that a total of 24,000 people would be evacuated from the coastal province of Aurora, which is expected to be hit by Typhoon Maysak in the early hours of Sunday.

He spoke as state weather forecasters warned that Maysak’s maximum sustained winds of 160 kilometers (99 miles) per hour, was on a collision course with the Philippines.

They predicted that the storm, which had been a super-typhoon but has since weakened to typhoon strength, might lose more steam after crossing the main Philippine island of Luzon, but that large waves of up to two meters (6.6 feet) may hit the area.

UN Announces Humanitarian Aid Impact Year After Typhoon Hit Philippines
"This will bring waves which our surfers really like. But this is a typhoon we are facing, even if we say it may become just a storm. The waves will be strong and it will be dangerous for our fellowmen in the eastern coasts," according to forecaster Esperanza Cayanan.

Meanwhile, Philippine Social Welfare Undersecretary Vilma Cabrera has said that around 10,000 tourists had been warned to stay away from Aurora’s beaches.

Separately, local fishermen were ordered not to go out to sea while Typhoon Maysak remained close to the eastern coastline.

Last week, at least five people were killed and thousands more displaced when the typhoon pummeled the Federated States of Micronesia.