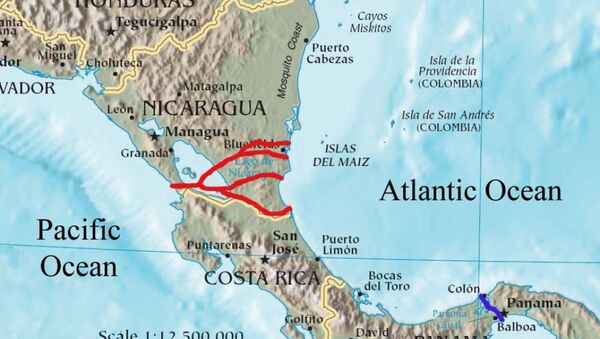 A senior researcher at the China Institute of International Studies (CIIS) thinks Moscow may benefit both strategically and economically if Russia provides security during the construction of the Nicaragua Canal.

MOSCOW (Sputnik) — Russia will gain both strategically and economically if the country helps provide security during the construction of the Nicaragua Canal, a senior researcher at the China Institute of International Studies (CIIS) told Sputnik Friday.

"Economic factors also come into play here, but security reasons are more important. First of all, from a geopolitical point of view, the buildup of US military presence at the Russian border makes Russia think about boosting their military presence in Latin America," Chen Yurong, who is Secretary General at the CIIS Center for Shanghai Cooperation Organization Studies, said.

Another Chinese researcher from the Zhejiang International Studies University (ZISU) told Sputnik that the construction of the Canal was Nicaragua's internal affair, and any foreign interference would be inadvisable.

Russian Defense Minister Awarded by Nicaragua Amid Cooperation Boost
"Russia's wish to bolster its military presence in the Western Hemisphere could lead to a confrontation with the United States and the escalation of tensions in Latin America. We shouldn't forget about the bitter lesson of the Cuban Missile Crisis. That's why Russia had better forget about the Nicaragua Canal," Tang Jun, Deputy Director of the ZISU Institute of Latin American Studies, said.

Last month, Russian Foreign Minister Sergei Lavrov said in a televised interview that Moscow was ready to help Nicaragua provide security at the building site of the Interoceanic Grand Canal.

The minister, who spoke ahead of his official visit to the Central American country, added that the two countries had not discussed Russia's possible assistance yet.

Meanwhile, reports in the US media claimed Russia was planning to sell fighter jets to Nicaragua, raising concerns over Moscow's growing presence in the region.

Chen Yurong, who is Secretary General at the CIIS Center for Shanghai Cooperation Organization Studies, said any Russian plans to bolster cooperation with Latin American nations would come as a natural response to enhanced NATO presence in Eastern Europe.

Russian Defense Minister to Visit Venezuela, Cuba, Nicaragua This Week
"The buildup of Russian military presence in Latin American will become an answer to NATO's growing presence near the Russian border over the past year – to ballistic missile defense components in Eastern Europe, to military exercises in the Baltic states, because these actions are aimed against Russia," Chen Yurong said.

Apart from Nicaragua, Russian Foreign Minister Lavrov visited Columbia, Guatemala and Cuba during his latest tour of Latin America in March, prompting US Congresswoman Ileana Ros-Lehtinen to say the tour was "a play for more influence" in the region.

In February, Russia and Nicaragua signed an agreement on simplified procedures allowing visits of Russian warships to ports in the country.

It was one of several agreements aimed at expanding bilateral military and technical cooperation, according to Russian Defense Minister Sergei Shoigu, who also visited Venezuela and Cuba.

Nicaragua began building the $50 billion dollar canal that would connect the Atlantic and the Pacific Oceans on December 22. The private Hong Kong Nicaragua Canal Development (HKCD) Group was commissioned to complete the ambitious project within 5 years.

The new canal is set to be longer and wider than the already existing Panama Canal.

The HKCD was granted a 50-year concession to manage the project, with a possible extension for another 50 years, after the construction is completed.