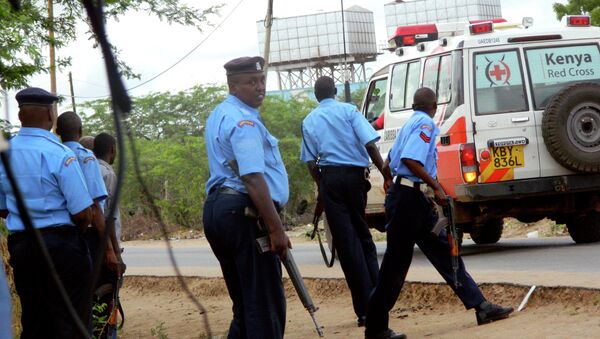 © AP Photo
Subscribe
International
India
Africa
The United States condemned the terrorist attack on the university in Garissa, during which 147 people were killed, including four attackers.

WASHINGTON (Sputnik) — The Al-Shabaab attack on the Garissa University College in Kenya near the border with Somalia has claimed 147 lives, including four attackers, making it the worst terrorist attack in the country since the 1998 bombing of the American Embassy in Nairobi.

The United States condemned the attack on the Garissa, Kenya University College, and reassured the Kenyan government of its support in the fight against the Al-Shabaab terrorist group, according to a White House press release.

“The United States condemns in the strongest terms today’s terrorist attack against the innocent men and women of Garissa University College in eastern Kenya,” the release, issued on Thursday, said.

Africa
At Least 70 People Killed, 79 Injured in Kenya University Siege
“The United States is providing assistance to the Kenyan Government, and we will continue to partner with them as well as with others in the region to take on the terrorist group Al-Shabaab,” the White House press release noted.

The Kenyan authorities have reportedly announced a reward of $215,000 for any information about Mohamed Mohamud, or Mohamed Kuno, who is considered to be the mastermind behind the Garissa attack.

Kuno, also known as Sheikh Mohamed, is the leader of Al-Shabaab forces in the Juba Region of Somalia on the border with Kenya.

Al-Shabaab, a clan-based militant group linked to the international terrorist organization al-Qaeda, violently took over most of Southern Somalia in 2006, expanding its insurgency and carrying out frequent gunfire and suicide attacks.

In 2011, Kenya declared war on Al-Shabaab after a series of kidnappings by the terrorist group. Since, Al-Shabaab has committed numerous terror attacks in Kenya's northeast.