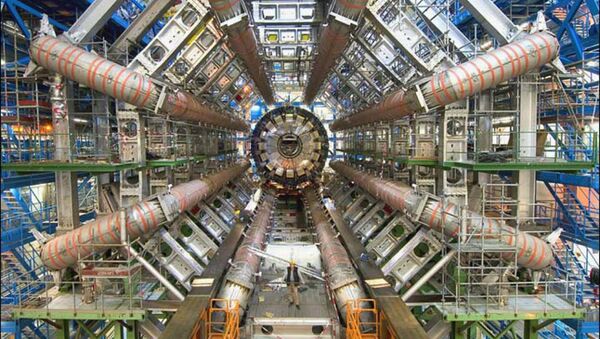 © Flickr / Image Editor
Subscribe
The Large Hadron Collider (LHC) is expected to be restarted over the weekend after a two-year hiatus, the European Organization for Nuclear Research, CERN, said Thursday.

CERN Large Hadron Collider Back on Track Following Tech Glitch
MOSCOW (Sputnik) — The teams working on the particle accelerator are said to have solved the problem delaying the restart of the LHC on March 31 and are now completing final tests.

"We are confident of being able to restart the machine over the weekend, as all of the tests performed so far have been successful," Director for Accelerators and Technology at CERN Frederick Bordry was quoted as saying in an official press release.

The collider was stalled for repairs in 2013 after CERN workers discovered a new particle reminiscent of the long-sought Higgs boson, the "God particle," a subatomic particle believed to be key to the understanding of the formation of the universe.

CERN Large Hadron Collider's Relaunch Delayed Indefinitely
According to the press release, operators will work round the clock once the LHC and the whole of the accelerator chain are running again.

The upgraded collider is now twice as powerful as two years ago, according to Bordry.

On March 12, CERN Director-General Rolf-Dieter Heuer said at a press conference in Geneva that the accelerator would go live for a period of three years, with the first experiments scheduled for late May.

The LHC, the world's largest and most powerful particle accelerator, was set up in 2008 to gain a better insight into the mystery of dark matter.

It consists of a 27-kilometer (almost 17 miles) ring of superconducting magnets with a number of structures boosting the energy of particles, according to the LHC official website.