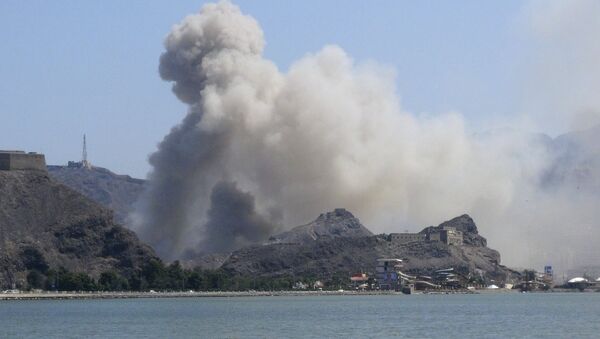 Earlier Saudi-led coalition which has been trying to stop Houthi advances said it controls the waters around Aden.

Tanks in #Aden streets of Crater. Between Fun City and Babil area.

"The number of troopers who landed in the Yemeni Aden port is unknown, but we are talking about dozens. They were covered by several airplanes. They disembarked from Saudi and Egyptian ships," Ahmad Al-Shami, a member of Ansar Allah movement, told Sputnik.

"If it is preparation for the ground operation, we would meet them with fire," he added.

Member of the Houthi political council Daifullah Shami also confirmed to Sputnik that the foreign soldiers had disembarked from Saudi and Egyptian vessels.

As the fighting in the city of Aden continues, conflicting media reports are emerging with officials loyal to Hadi denying the information that foreign ground troops had disembarked at the port.

"All ships carrying humanitarian aid forbidden to approach the coast of Yemen, the airspace is also closed," he noted.

A member of Ansar Allah suggested two explanations why the foreign troops disembarked in Aden.

"The first one, the most welcome for us, is that soldiers landed to protect and to evacuate their citizens from Aden. The second one is that they are really preparing for a ground operaion, but we are ready to repel any attack," Ahmad Al-Shami said.

The Houthis control almost everything in Aden except for oil refineries and road junction that are controlled by the Yemeni government forces, he said.

Earlier Thursday fightings between Houthi rebels and forces loyal to President Hadi have intensified in the Yemeni Aden port. Bodies were lying in the street, according to eyewitnesses. Meanwhile, at least 44 people were killed, including 18 civilians, as fierce fighting continues in the area.

Yemen: Aden on fire. Houthis on the mountain tops. pic.twitter.com/95ubzwY0lw

Foreign countries and international organizations, including the United Nations, have been evacuating their citizens and staff from Yemen amid the intensified conflict.