‘American Unilateral Sanctions Do Not Work’ - US Ambassador John Bolton 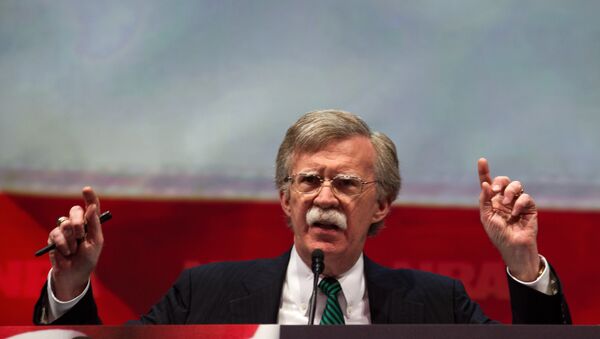 © AFP 2023 / Karen BLEIER
Subscribe
International
India
Africa
US Ambassador John Bolton said economic sanctions cannot solve the problem of Iran's nuclear program, as sanctions against countries like Iran or North Korea could only work when the sanctions are enforced by use of military power.

“Economic sanctions cannot solve the problem of a nuclear Iran,” Bolton said on Wednesday. “The North Koreans were experts at evading them.”

Bolton spoke about similarities in nuclear agreements the United States has made with North Korea and Iran.

US, Iran Will Not Go to War if Nuclear Talks Fail - Middle East Expert
The Ambassador explained Iran uses partnerships with other organizations and countries to avoid sanctions such as transporting oil into Iraq, labeling it as Iraqi oil, and transporting it up to the northern Kurdish areas of Iraq into Turkey.

“Countries are engaged in counter trade to avoid the financial side of the sanctions,” Bolton said. “I think it’s fair to say economic sanctions have caused pain in Iran and what has really caused problems is 35 years of misguided economic policies.”

Bolton noted North Korea’s case is very similar in that after the UN Security Council- imposed sanctions in 2006, North Korea continued to receive assistance, participate in international financial transactions and work on their ballistic missile and nuclear programs.

World
Pyongyang Ready to Fire Nuclear Missiles ‘Anytime’ – North Korean Diplomat
“Both American and South Korean commanders predict North Korea’s ballistic missile tests are making significant progress, and will eventually be able to mate a nuclear device with a ballistic missile capable of hitting the west coast of the United States,” he added.

Bolton concluded that economic sanctions against a rogue state can only work when all allied countries adhere to those sanctions, and when the sanctions are rigorously enforced by use of military power.

John Bolton Served as US Undersecretary of State for Arms Control and International Security from 2001 to 2005. Bolton become US permanent representative to the United Nations in August 2005 and served in that position until December 2006. He is currently a Senior Fellow at the American Enterprise Institute focusing on foreign and national security policy.