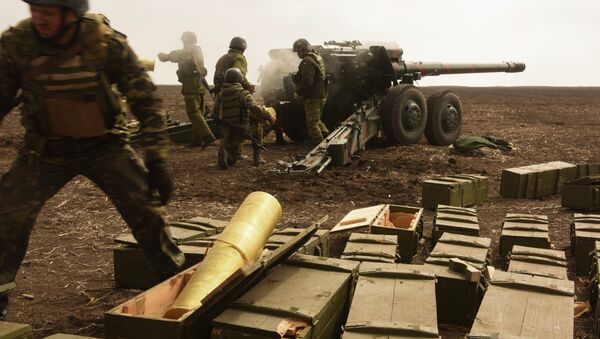 © AP Photo / Mstyslav Chernov
Subscribe
The US Army is hoping to benefit from the ongoing conflict in Ukraine in perhaps one unexpected way: by collecting what they say could be useful intelligence about Russian military technology.

"Certainly, we’re taking advantage of the opportunity to study what’s being done in Crimea and in Eastern Ukraine, where the Ukrainians have employed the counter-fire radar," Lt. Gen. Ben Hodges, commander of the US Army in Europe said Tuesday at an Army conference in Huntsville, Alabama, Dod Buzz reported.

US Edits Intelligence Data Before Sharing With Ukrainian Military

Twenty radar systems that help counter mortar fire were part of a $118 million aid package the US supplied to Kiev.

"The lightweight counter-mortar radar, turns out, that it is a much better piece of equipment than we realized," said Hodges. "None of us have ever — maybe one or two exceptions — have ever been under a massive Russian artillery [attack] the way the Ukrainians have, and so we have learned a lot in the way that they have responded to that."

While NATO and the United States insist Russia is actively fighting in the nearly year-long violence in Ukraine, Moscow has consistently denied the allegations of its involvement.

There is also potential to study cyber threats such as the hacking of weapons and intelligence systems, US military officials say. Russian arms and technology firm Rostec revealed it hacked into an American intelligence drone last year as it flew over Crimea.

And the Army hopes this experience will give them insight into how to improve and protect the crucial network technology they've spent billions of dollars trying to upgrade.

“But actually to be able to project combat power into the Port of Riga [in Latvia], or Port of Bremerhaven or Ramstein [in Germany], there is so much reliance on network, and the Russians have demonstrated so much capability in Ukraine in their electronic warfare capabilities that makes it not almost impossible but extremely difficult to operate networks, especially if they’re unsecured,” said Hodges.

Lt. Col. John Davis gave an example of a trouble spot — from Afghanistan, not Ukraine — describing the difficulty the AH-64E Apache has had viewing live video streams because it uses a more advanced secure communications system than the drone doing surveillance.

Hodges also added that making sure that all these complex systems can talk to each other while operating among distinct forces within an international coalition is yet another goal for the systems' improvement.