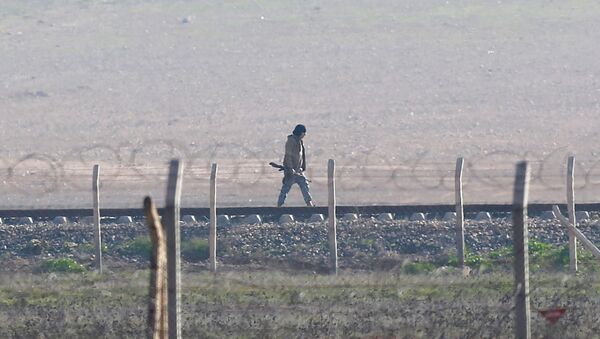 "We are checking this information urgently," the representative told RIA Novosti.

Foreign Fighters Flock to Syria With Trivial Knowledge of Islam
Earlier in the day, Turkish army said that the arrests took place in the Hatay province in southern Turkey. Sky news said that 2 men, 3 women and 4 children were among the detained.

Britons are reportedly waiting to be deported to the United Kingdom.

Recently, many European citizens, including British nationals, travelled to Syria and Iraq to join extremist groups, such as the Islamic State (IS). In March, a 21-year-old woman and, separately, three British girls were detained after arriving in Turkey illegally. Turkish officials argue they need a more timely information from Western intelligence agencies so as to effectively detain such foreigners.

ISIL Foreign Fighters Use Fake Syrian Passports to Cross Turkish Border
The Islamic State is a jihadist group notorious for its human rights abuses, multiple kidnappings and killings. In 2014, it took vast territories in Iraq and Syria under its control and proclaimed an Islamic caliphate. The group’s affiliates also operate in North Africa, Yemen, Pakistan and Afghanistan.

The IS has been reported to recruit thousands of westerners. The group’s intensive propaganda efforts on social networking websites especially target young people. About 600 British residents are currently fighting alongside the Islamic State (IS), according to the London-based International Center for the Study of Radicalization and Political Violence.

According to a 2014 public opinion poll conducted in France by ICM Research exclusively for Sputnik News Agency, 26 percent of French youth who participated in the poll expressed some form of support for Islamic State.