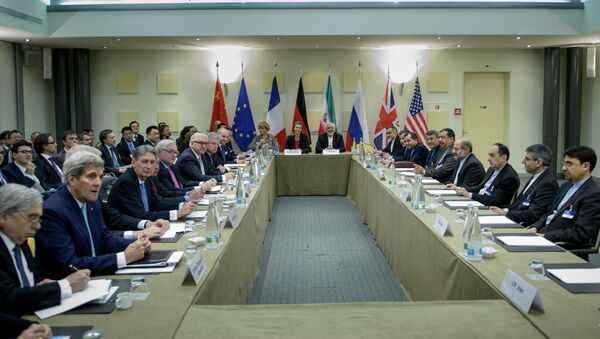 A joint statement by the P5+1 and Iran Group on the framework of the Iranian nuclear energy issue will be made later on Wednesday, Iranian Deputy Foreign Minister Abbas Araqchi said.

LAUSANNE (Sputnik) – Iranian high-ranking diplomat said a final deal to be struck hopefully in July would be a single comprehensive agreement.

"We will make a statement on the conclusion of the basic issue that we have reached over the past days,” Araqchi said in an interview with the Iranian state TV.

Tuesday was the deadline for reaching a framework for the comprehensive deal between Iran and the P5+1 group, comprising Russia, the United States, the United Kingdom, France, China and Germany, on Tehran's nuclear energy program. After failing to reach an agreement by the deadline, the parties resumed negotiations Wednesday.

China Proposes 4-Point Plan on Solving Iranian Nuclear Issue - Chinese FM
"We are not prisoners of time and prioritize the content of the talks," Araqchi stated.

The P5+1 countries have been negotiating with Iran to halt its uranium enrichment program, fearing the Islamic Republic is developing nuclear weapons under the guise of a civilian energy program.

The agreement could result in the easing or lifting of international economic sanctions in exchange for curbs on Tehran's nuclear research and increased monitoring of nuclear facilities. Iran has requested the immediate removal of the sanctions.