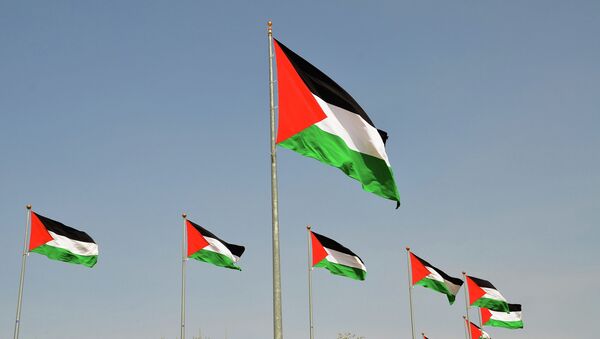 Sir Bob Russell, who tabled a motion in parliament last January that called for the state of Palestine to be recognised by the UK, welcomed Palestine's accession to the International Criminal Court (ICC) on April 1, 2015, saying it was the first step on the road to the end of the oppression of the Palestinians.

Palestine’s Minister of Foreign Affairs arrives at #ICC, as #RomeStatute enters into force for Palestine pic.twitter.com/rzLTi4qqEd

"The fact that they are subject to Apartheid, ethnic cleansing and — wickedly — a breach in international law and the Geneva Convention and United Nations resolutions by the government of Israel," he told Sputnik in an exclusive interview.

He said the Palestinians were the most oppressed people in the world, since their country was "given away" with the approval of the UK.

Recognizing the State of Palestine
"The people of Palestine didn't give up their nation, it was stolen from them and has increasingly had other bits stolen from it by occupation by Israel in breach of international law. Sooner or later — and I hope it's sooner — Israel will be called to account and this decision [for Palestine to accede to the ICC] is one step along the road," he told Sputnik.

In January, Sir Bob Russell tabled a motion in the UK Parliament in which MPs voted 274 to 12 to approve the statement: "That this House believes that the Government should recognise the state of Palestine alongside the state of Israel, as a contribution to securing a negotiated two state solution."

British MP Calls for Single State Solution to Israel-Palestine Crisis
However, at the United Nations Security Council meeting soon afterwards, Britain abstained as delegates failed to adopt a draft resolution that would have affirmed the "urgent need" to reach within 12 months a peaceful solution to the situation in the Middle East and would have paved the way to a Palestinian state with East Jerusalem as its capital.

"The Palestinians, as a country and as a people, have been oppressed since 1948, with the acquiescence of the United States, Great Britain and many other countries," said Sir Bob.

On Wednesday, Palestine's Minister of Foreign Affairs Riyad al-Maliki arrived at the ICC headquarters building in The Hague, Netherlands to seal the accession under the Rome Statute.