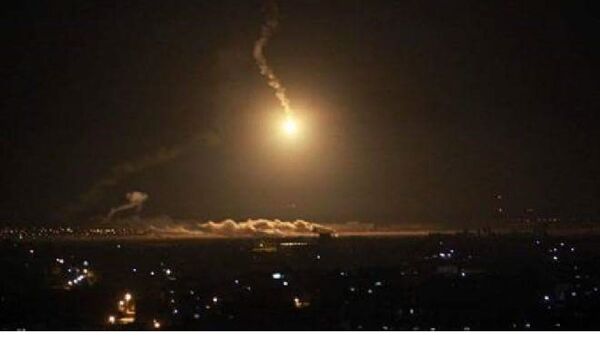 © Sputnik / Faisal Al Shabibi
Subscribe
The lawlessness and outright aggression demonstrated by the West and Arab dictatorships, particularly, the blitzkrieg against Yemen, resembles the state-sponsored gangsterism of fascist powers of the 1930s, noted Finian Cunningham, a prominent expert in international affairs.

Saudi-Led Coalition May Carry Out Limited Ground Campaign in Parts of Yemen
The illegal collective bombing of Yemen, launched by a Saudi Arabia-led coalition and guided by the US with the tacit approval of the Arab League and the United Nations, echoes the barbarism and lawlessness of the 1930s, that paved the way for the Second World War, noted Finian Cunningham, an author and prominent expert in international affairs.

"Both the Arab League and the United Nations have fully transformed themselves into the ill-fated League of Nations that more than 70 years ago disgraced itself into oblivion when it failed to condemn foreign aggressions that eventually led to the cataclysm of World War Two," Finian Cunningham underscored.

Since last week, dozens of Yemeni peaceful civilians, including women and children, have been slaughtered by a Saudi Arabia-led military coalition coordinated by the United States. Both the United Nations and the Arab League have turned a blind eye to the ongoing massacre, the author noted.

While UN secretary general Ban Ki-Moon has demonstrated "lamentable passivity" in the face of the aggression on Yemen, the Arab League openly endorsed massive air strikes against the impoverished Arab state. Meanwhile, Saudi Arabia prepares for a full-scale invasion, amassing 150,000 Saudi troops along the northern Yemeni border. However, the foreign intervention in Yemen has been denounced by Iran, Russia and China.

Such brazen aggression has possibly marked the "nadir" of the Arab League and the United Nations, the author claimed, referring to a gradual degradation of international institutions and their embarrassing "transformation into tools of aggression" since the 1990s.

Both international organizations remained silent, while Washington along with its allies unleashed "war after war" during the 1990s and 2000s. Therefore, Libyan leader Muammar Gaddafi, murdered by NATO-assisted and Gulf-sponsored Islamists in 2011, slammed the Arab League as "finished," the expert emphasized.

"Ominously, the lawlessness and outright aggression that has gripped international affairs – with the latest manifestation in the collective bombing of Yemen – is reminiscent of the 1930s," Finian Cunningham noted.

He referred to a series of international military aggressions conducted by fascist regimes in the 1930s, particularly, the seizure of China's Manchuria by Japan in 1931, Italy's invasion of Abyssinia (Ethiopia) in 1935-36, Franco's Spain assault on Catalonia in 1938, and Hitler's Nazi Germany intervention in Austria and Czech Sudetenland, in 1938. Alas, the League of Nations, the predecessor of the United Nations, did nothing to stop the aggressors. So far, the fascist regimes' gangsterism paved the way for the Second World War.

A strikingly similar process led by the United States, Washington's NATO allies and Arab dictatorships could be observed nowadays, the author pointed out. "And yet, ludicrously, Washington accuses Putin and Moscow of behaving like Hitler with a malign 20th Century atavism," he remarked with bitter irony.

The fact that the impoverished Yemeni nation is being bombed with the tacit approval of international organizations and European governments means the world is once again "sliding into the abyss" of possibly more devastating global war, warned Finian Cunningham.