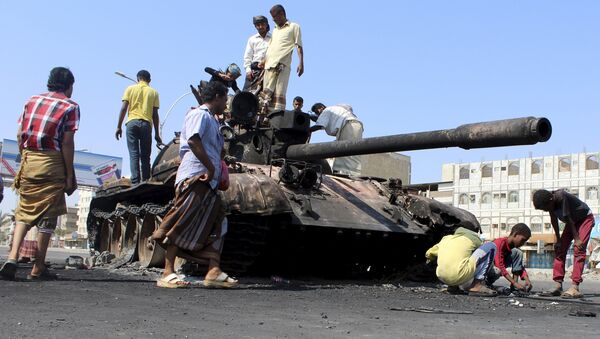 © REUTERS / Stringer
Subscribe
A spokesman of the Saudi-led joint operations command in Yemen said there may be a limited ground campaign in parts of Yemen.

Government Forces Recapture Large Part of Yemen Aden Airport
CAIRO, March 31 (Sputnik) — A limited ground offensive may be carried out in parts of Yemen under the control of Houthi rebels, a spokesman of the Saudi-led joint operations command in the war-torn Gulf nation said Tuesday.

"Each air campaign must be accompanied by a ground campaign. There may be a limited ground campaign in specific areas and at a certain time, but you should not expect an automatic ground invasion," Brig. Gen. Ahmed Asiri told reporters in a televised press conference in Riyadh.

Saudi Arabia, alongside several other Arabs states, including Egypt, Jordan, and the United Arab Emirates, has been carrying out airstrikes against Houthi rebels in Yemen since last week.

The Houthis, a Shiite insurgent group, led months of major rallies against alleged government discrimination in the country before forcing Yemen’s leadership to resign in January.

The group currently controls parts of Yemen, including the capital Sanaa, while ousted president Abd Rabbuh Mansur Hadi has fled the country.