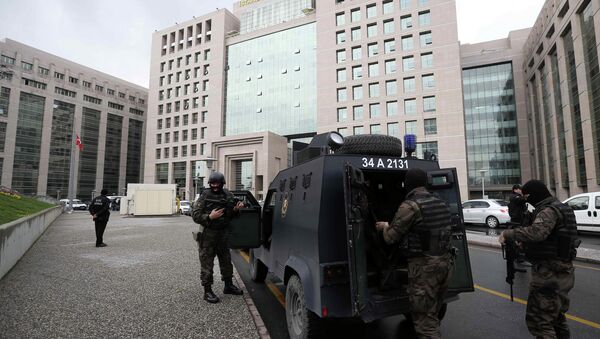 A far-left Turkish group took an Istanbul prosecutor Mehmet Selim Kiraz hostage and threatened on its website to kill him. The group has reportedly let the prosecutor's secretary and assistant go.

MOSCOW (Sputnik) — A Turkish prosecutor, Mehmet Selim Kiraz, investigating the death of a teenager hit on the head by police during anti-government protests in 2013, was taken hostage Tuesday by the Revolutionary People’s Liberation Party-Front (DHKP-C) in the courthouse in Istanbul, Turkish local media reported.

The Revolutionary People's Liberation Party-Front (DHKP-C) published a picture of the prosecutor with a gun to his head.

Şükrü Serdar Kantarcı, a member of the opposition people’s Republican party from Istanbul’s Kadıköy district, explains Sputnik the reasons behind this crisis:

“As to the motives behind these people’s decision to take hostage Istanbul’s chief prosecutor… in the case of the slain teenager Berkin Elvan, I can see clear violations on the part of the authorities… I mean the police officers and the state prosecutor who was taken hostage.”

“Several police officers were arrested after innocent teen Berkin Elvan,  was shot and killed by police during the 2013 Gezi Park protests. A month later it transpired that the signatures of the suspects had been forged. As a result, none of the law enforcers was punished. The reasons why the Istanbul prosecutor was taken hostage may vary, but the primary reason is the violation the rights of that innocent young man who was killed by a gas gun shell. There may be other reasons too, but that’s the only statement we have got so far from the hostage takers,” Şükrü Serdar Kantarcı said.

Shooting could be heard inside the court building, Sabah newspaper said.

A local TV showed special forces officers entering the building and courthouse officials being escorted out.

Turkish special forces entered the courthouse in Istanbul where a prosecutor, Mehmet Selim Kiraz, is being held hostage by an armed far-left group, after the building was surrounded.

The Revolutionary People's Liberation Party-Front has reportedly announced five demands. The one of them is a negotiator. The rest four demands have been not disclosed yet.

According to the preliminary reports  the group had given a deadline of 12:36 pm GMT for the prosecutor to identify the police officers who were alledgedly behind the killing of Elvan or he would be shot.

The group promised to kill the hostage if the building was stormed.

The Turkish prime minister has the situation under control despite the meeting with the ministers over the recent blackout across the country.

Meanwhile, the father of Berkin Elvan has demanded not to kill the prosecutor: "My son is dead, I don't want anyone else to die. Let him go!"

limesonline: RT diehimbeertonis: Father of #BerkinElvan: "My son is dead, I don't want anyone more to die. Let him… pic.twitter.com/47LT29vdBf

Moreover, the father of the teenage boy who was killed revealed the video via his son's Twitter:

Berkin Elvan was hit on the head by a police officer in June 2013, during mass anti-government rally in Istanbul. He died in March 2014, after 269 days in a coma. The investigation into the Berkin Elvan case is ongoing.

The DHKP-C is a radical leftist group, founded in 1978 as Revolutionary Left, and then re-branded in 1994. The organization is considered a terrorist group in Turkey.