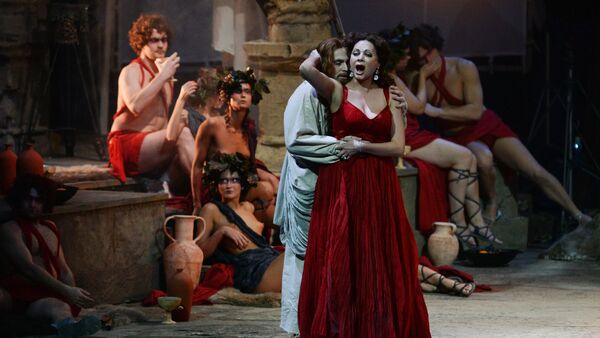 The scandal, concluding Sunday when the Ministry of Culture gave Mezdrich his notice, involved a modern interpretation of the Wagner opera Tannhauser, featuring a Christ-like figure spending his time engaging in carnal pleasures in a brothel, before being crucified between the legs of a naked woman. Orthodox Christian and social conservative activists found the scenes disturbing, and the local Diocese filed a complaint to local authorities, saying the play had "desecrated figures of religious worship."

Commenting on Mezdrich's firing on Monday, Presidential Press Secretary Dmitri Peskov stated that censorship in art is unacceptable, but that at the same time the government is fully within its rights to expect that productions staged using government funds do not lead to public scandals and outcry.

The Ministry of Culture published a statement regarding its decision on its website, stating that Mezdrich had not taken account of public opinion and of established social values and norms, nor the recommendations of Ministry officials to negotiate with social and religious organizations stepping out against the play. The Ministry added that while it respects unconditionally the principle of freedom of artistic creativity, it also recognizes the rights of citizens who demand respect for their values and religious feelings. The Ministry also noted the theater is first and foremost an institution of education and enlightenment, and not a place for provocative self-promotion at the public's expense.

Theater in Australia Bans Holocaust Memorial Night for 'Zionism'
The Ministry of Culture had earlier spent several months attempting to negotiate with Mezdrich over the perceived impropriety of the production, launched last December.