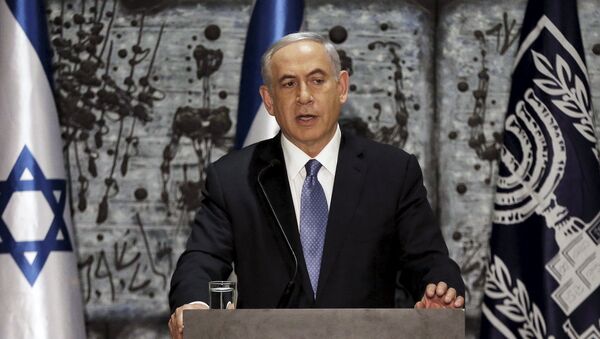 © REUTERS / Ammar Awad
Subscribe
Israel's Prime Minister Benjamin Netanyahu has lashed out at the framework of the Iranian nuclear deal that international negotiators are desperately trying to finalize.

Deal on Iran Nuclear Program Impossible if Sanctions Remain in Place
The framework Iranian nuclear agreement sought by international negotiators   is even worse than Israel had feared, according to the country's Prime Minister Benjamin Netanyahu.

"This dangerous deal, as it appears to be emerging, bears out all of our fears, and even more than that," Netanyahu said.

He also pointed to advances made by Iranian-allied forces in Yemen and other Arab countries, blaming the Islamic republic for allegedly trying to "conquer the entire Middle East" while moving toward obtaining nuclear weapons.

"The Iran-Lausanne-Yemen axis is very dangerous to humanity, and must be stopped,"  according to Netanyahu, whose country is widely believed to have nuclear weapons itself.

Netanyahu spoke as Tehran and the six world powers are working diligently to clinch a comprehensive agreement on the Iranian nuclear program ahead of the March 31 deadline in Lausanne, Switzerland.

Iran, P5+1 Discuss New Ideas, Solutions Expected on Sunday
US Secretary of State John Kerry, as well as the German and French Foreign Ministers even reportedly cancelled their travel plans to stay at the negotiating table.

The six world powers, also known as the P5+1 group, are seeking to ensure that Iran cannot develop nuclear weapons. Tehran, in turn, denies that its uranium enrichment is being used for the construction of nuclear weapons, and says that its nuclear program is purely peaceful.

As for Netanyahu's efforts to campaign against Iran's nuclear talks, they culminated in his March 3 address to US  Congress.

Back then, the Israeli Prime Minister slammed Tehran's nuclear program as "boring and repetitive." He also warned President Barack Obama against negotiating a nuclear agreement with Iran that he said would be a "countdown to a potential nuclear nightmare" by a country that "will always be an enemy of America."