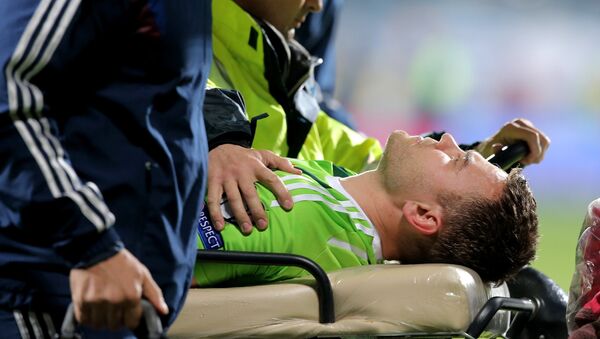 © Sputnik / Vitaly Belousov
/
Go to the photo bank
Subscribe
The football fan who threw a flare at Russian goalkeeper Igor Akinfeev has been arrested, after a match which the Montenegrin media called "the end of football as a civilized sport in Montenegro."

The Montenegrin goalkeeper who played in the abandoned Euro 2016 qualifier match between Montenegro and Russia has expressed his anger at the behavior of supporters who caused Russia goalkeeper Igor Akinfeev to be hospitalized and several times endangered the safety of players by throwing objects onto the pitch including coins, a lighter and according to some reports, a knife.

The video above, taken by a supporter a few meters away, captures Montenegro fan Luka Lazarević throwing the flare from the stand.

"I can't begin to imagine what will happen in the near future, after a month or two, six months. OK, play will go on, but I think that real football has been destroyed, for the national team and club representation," goalkeeper Vukašin Poleksić told Vijesti.me.

"When we are such a small nation and we can't welcome Russians like real friends, like they for sure would welcome us, then we really don't deserve to be on the football map," said  Poleksić, who saved a penalty from Russian captain Roman Sirokov in the 66th minute, just before the match was finally called off, having been stopped twice previously.

"The problem is that this isn't the first time. The Polish goalkeeper was also hit two years ago," explained   Poleksić. "I know that this isn't just a problem for Montenegro; matches have been called off elsewhere in the region. In the Balkans you don't need much for tensions to flare up. But if the English could sort out their hooliganism problem 20 years ago, then I am convinced that anybody can, and it's high time that that process begins."

The incident is not the first to mar qualification matches for the 2016 European Championship involving teams from Balkan countries. In October last year, a qualifier between Serbia and Albania held in Belgrade was called off in the 44th minute after clashes were sparked when a drone appeared over the pitch carrying a picture of the Albanian flag superimposed on a land mass of 'Greater Albania' which included the territory of Kosovo and areas of southern central Serbia, as well as parts of other surrounding countries.

On Friday, Croatian Football Federation [HNS] President Davor Suker said that he feared disorder from fans ahead of the team's qualifier with Norway on Saturday, having heard "rumors about potential clashes of some sections of fans in the north stand or another part of the stadium. We got a yellow card from UEFA because of disorder in Milan."

Russia v Montenegro Qualifier Cancelled Due to Fans' Repeated Fire Attack
That match in the end passed without incident, and finished with a 5 – 1 victory for Croatia in Zagreb's Maksimir stadium, which was below capacity due to a punishment handed down by UEFA following hooliganism from Croatian fans in Milan's San Siro stadium in November, when they shouted racist slogans, threw flares onto the pitch and clashed with police. UEFA fined HNS €80,000 [$87,000] as a result of the incident, and ordered Croatia to close a section of the stadium for their next qualifier, reducing the number of their supporters at the game by at least 8,000.

On Saturday Montenegro supporter Luka Lazarević, caught on camera throwing the flare at Akinfeev, was arrested after handing himself into police, and issued an apology to Akinfeev. UEFA is currently considering what punishment the Montenegro team will receive for their fans' behavior. A hefty fine seems likely, as well as Russia receiving all three points from the game, and the team being forced to play its matches behind closed doors. On Friday, goalkeeper Akinfeev thanked supporters and said he was now feeling OK after the incident, adding "I hope that nothing like this happens again, in Montenegro, or anywhere else."