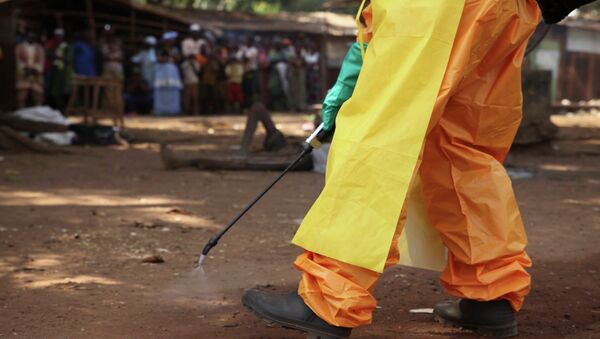 © REUTERS / Misha Hussain
Subscribe
International
India
Africa
A 45-day "health emergency" has been announced in five regions in western Guinea over the spread of Ebola virus.

Africa
Ebola Returns to Liberia After Month-Long Pause
Guinea's President Alpha Conde has declared a 45-day "health emergency" in his country's west and southwest in an attempt to contain the Ebola outbreak, sources said.

In a statement on Sunday, Conde said that the virus "has shifted to our country's coastal areas", which is why he has decided to "declare in the districts of Forecariah, Coyah, Dubreka, Boffa and Kindia a reinforcement of emergency measures for a period of 45 days."

According to him, the restriction measures include the temporary closure of hospitals and clinics where new cases are detected, as well as new rules on burials and new quarantine procedures.

Conde warned of a possible clampdown on anyone who violates the emergency rules.

"Anyone who hides the sick or moves bodies from one locality to another will be prosecuted according to the law for endangering the lives of others," he said.

The statement came almost three months after the World Health Organization reported a steady decline in the Ebola cases in the three West African countries which constitute the epicenter of the disease: Liberia, Sierra Leone and Guinea.

Fear Ebola No More: Russia Starts Testing Four Ebola Vaccines on Primates
However, recent setbacks there have sparked renewed concern over the spread of the deadly virus across West Africa.

On Friday, Sierra Leone launched a new three-day nationwide lockdown because of reports that the Ebola virus was making a comeback in some areas in the country.

Liberia, in turn, announced on Saturday the death of a woman who became the country's first new Ebola patient in more than a month; it prevented Liberia from being declared Ebola-free by mid-April.

The virus has already killed more than 10,000 people in Guinea, Liberia and Sierra Leone.