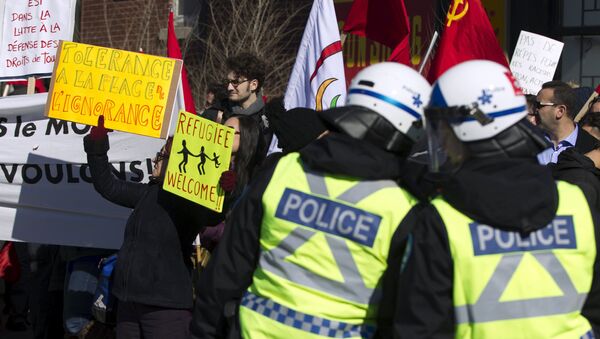 © REUTERS / Christinne Muschi
Subscribe
Pegida announced that it cancelled its planned rally in Montreal after police advised those who showed up for the event to leave, as a counter-demonstration had been organized on the spot.

MOSCOW (Sputnik) – Pegida (Patriotic Europeans Against the Islamization of the West) cancelled its planned rally in Montreal after police advised those who showed up for the event to leave, as a counter-demonstration had been organized on the spot, the group has announced.

"PEGIDA Quebec had to cancel its peaceful march," the group said on its Facebook page, explaining that the decision was motivated by safety concerns and was made "at the advice of police."

Hundreds of people reportedly showed up for a counter-demonstration against islamophobia in Montreal on Saturday, about 30 minutes before the Pegida march was set to begin in the same spot.

"We all know the Allah fanatics and how they can be violent," Pegida's Facebook message said.

The group added that it does not know the exact number of people who actually showed up for the planned Pegida Montreal march on Saturday. According to its Facebook page, 184 people RSVP'd to the event.

Pegida Canada Calls for Reformation of Islam, Plans March in Toronto
Pegida said that those who showed up for its Saturday march were "immediately intercepted by the police upon arrival" with the officers advising them "to leave for good."

The group also said that it is preparing for a second rally, to be held in the same place — Little Maghreb neighborhood in Montreal's suburbs — on April 4.

On Thursday, a source at Pegida Canada told Sputnik they were planning a rally in Toronto but did not specify a date.

Formed in October 2014, Pegida is a Dresden-based political movement that has been organizing marches to express its fear of what it calls the islamization of Europe.

The movement's activity in Europe seeks to boost the upswing in anti-Islamic sentiment following a series of gun attacks in Paris and Copenhagen carried out by radical Islamists.

Pegida Quebec first began posting on Facebook in January, 2015, shortly after the attack on the Paris office of the Charlie Hebdo satirical magazine. According to its Facebook page, the cancelled Saturday demonstration was Pegida Quebec's first action.

Pegida's influence spread outside of Germany in late February, with its anti-islamization rallies having been held in various parts of Europe, including the United Kingdom and Austria.