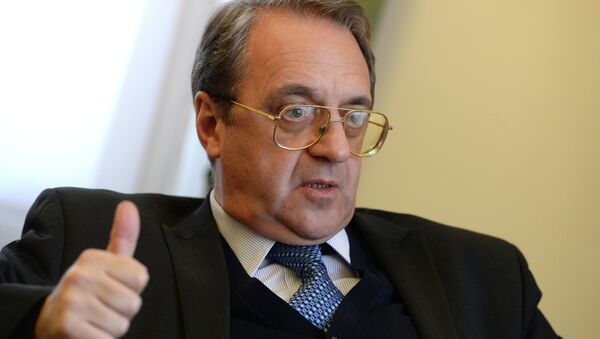 “We maintain contacts with all Yemeni sides, with President Abd Rabbuh Mansur Hadi, with former President Ali Abdullah Saleh and, naturally, with Houthis and of course they approach us, for us to aid the settlement [of their conflict],” Bogdanov, who is also Russian President's Special Representative for Africa and the Middle East, said. He added that Moscow calls on all the sides to Yemeni conflict to cease hostilities

The situation in Yemen has been rapidly deteriorating since August 2014 when protests of the Shiite Houthi opposition swept the country, leading to the resignation of the country’s elected government and president.

Yemeni FM Says Russia Calls for Dialogue Between Conflict Sides in Yemen
On Wednesday night an international coalition of Arab countries led by Saudi Arabia launched a military campaign targeting the positions of Houthi rebels in the Yemeni capital Sanaa. The attack came in response to a request by Yemeni President Abd Rabbuh Mansur Hadi.

According to the estimates by Human Rights Watch, the attack has claimed up to 34 lives of civilians.

Russian President's Special Representative for Africa and the Middle East Bogdanov is currently taking part in the Arab League summit in Egypt’s city of Sharm El-Sheikh. The two-day summit that started on Saturday is focused on discussing the recently intensified Yemen crisis. Earlier on Saturday, Bogdanov had a meeting with Yemeni Foreign Minister Riyadh Yassin.