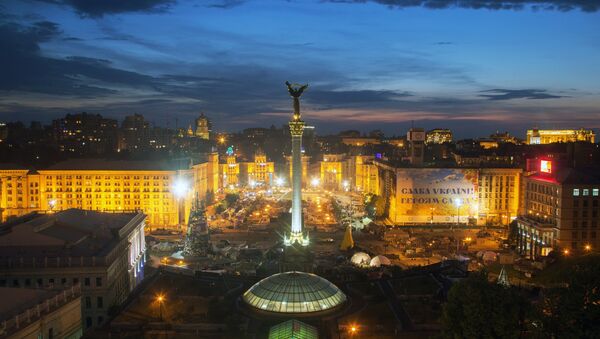 © Sputnik / Vitaliy Belousov
/
Go to the photo bank
Subscribe
Sunday, March 29 will mark the date when, according to Ukraine's constitution, the country would have held its regular presidential elections, had Viktor Yanukovych been allowed to serve out the remainder of his term.

Despite silence in the Ukrainian government and the oligarch-controlled media on the subject, social media has been the scene of an active discussion over the past month regarding this 'what if' scenario, with people reflecting on what might have happened to their country if the Maidan 'Revolution of Dignity', or the Maidan Coup, as it is known by opponents, had never taken place.

None of the Above:Poll Shows Ukrainians Don't Trust Leaders, Parties, Media
Most users who lament the events of the past year have no illusions about the deposed president, recalling the out-of-control corruption and mismanagement that marred Yanukovich's four-year term. The ex-president continues to be the source of endless memes, jokes and criticism on the Ukrainian (and Russian) internet. But whatever problems may have exist, users also pointed out that things could not have turned out any worse than they have since his ouster, including the loss of Crimea and the civil war that has broken out in eastern Ukraine.

Discussing Sunday's 'phantom election' date on Facebook, a user named Aleksei postulated that in an alternate timeline, perhaps Poroshenko would still emerge as a frontrunner and defeat Yanukovych, but in such a case "he would have become the president of a united Ukraine, including Crimea and Donbas."

A user named Ekaterina responded to Aleksei with a sentiment only too-well known across the former Soviet Union, namely that "what ifs do not exist in life. In reality, the things that occur are the only things that could have possibly occurred."

But others discussing the subject, on Facebook, Twitter, and a spattering of political forums, could not help but voice their disappointment and dissatisfaction over the way things ultimately turned out following Yanukovych's ouster, and the spiraling crisis Ukraine has found itself in since then.

Ultimately the impatience of the Euro-integrationist Maidan protesters and their powerful national and international backers, and their subsequent unwillingness to let an increasingly unpopular president serve out the remainder of his term in peace, carried Ukraine from one disaster to another.

40 Billion Dollar Aid Won’t Help Ukrainian Population – German Magazine
Amid political crisis in Kiev and threats against Russian speakers, Crimea broke off from Ukraine and joined Russia. Meanwhile, the revolutionary government's impatience with protesters in the east who sought autonomy and federalization led to a civil war in eastern Ukraine, in which thousands of people died and the economy of the industrialized east was irreparably damaged. Furthermore, Euro-integrationist hostility toward economic ties with Russia helped to plunge the rest of the country into a deep economic crisis, with no real solutions in sight, apart from foreign loans aimed at temporarily staving off complete disaster.

The population as a whole has been demoralized, with recent polling finding that the majority has become disillusioned with the government, the media and social institutions. Meanwhile, hundreds of thousands have fled to Russia as refugees from the war-torn east and from other areas of the country, while dozens of radicalized and armed ultra-nationalist formations have grown up like mushrooms since the coup and have taken the place of a weakened and dispirited state.

In Ukraine, Oligarchs' War of Words May Turn Into War of Bullets and Bombs
Pondering the tragedy of the situation last month on the one year anniversary of Yanukovych's ouster, independent journalist Maksim Kononenko  told Russia's Vesti FM radio station that if "a year ago, Ukraine was a poor country controlled by oligarchs," now, "a year later, it is a destitute country, controlled by the same oligarchs, one of them even becoming the president."

Commenting on the promises made to the Ukrainian people by proponents of European integration, who initially launched the Maidan protests following Yanukovych's suspension of negotiations on an Association Agreement, Kononenko noted that "none of the promises made to Ukrainians under the coveted European integration project have been fulfilled. The visa regime with European countries has not been lifted, but on the contrary, has been tightened. Ukraine has been told openly that it has no prospect for NATO membership. The question about membership in the EU has not even been discussed."

EU Has No Plans to Open Borders to Ukraine, Georgia Any Time Soon
Popular Kiev-based lifestyle magazine Nash Kiev ('Our Kiev') echoed Kononenko's sentiment earlier this week, prompting a comment war on its Facebook page by noting that "biometric passports don't work, one euro = 30 hryvnia, and the visa-free travel agreement for Ukrainian hasn't been placed on the agenda of the May [Eastern Partnership] summit…We're not ready to panic just yet, but are already impatiently waiting for the light at the end of the tunnel."

Comments over the post ranged from people criticizing the magazine's editors for their "pessimism," to users noting that pessimism is a perfectly logical feeling, given the extremely difficult situation that has engulfed the country. A user named Alisa asked "what visa-free agreement can we talk about in the current environment?…No sane government will open their borders to a country that has dug itself into such a deep hole, and integration has nothing to do with it." Pavel agreed, noting that "the economic part of the association agreement has been postponed, while the political part doesn't work, and trade with the EU has not replaced losses in other markets." Sergei rounded out the chorus of despair, noting that he is a patriot and loves his country, and that he would never consider going to live in Europe if he could stay in Ukraine, but "to just endlessly endure, and to blame everything on the war and the consequences of Yanukovych's corruption is just becoming impossible."

In December 2013, when the Maidan protests had already begun but had not yet spiraled into a full-blown crisis in the center of Kiev, President Yanukovych soberly assessed his electoral chances for 2015, noting that he would consider not seeking a second term if his approval ratings didn't improve over the next year. "If my approval rating remains low, and I face poor prospects [for reelection], I will step aside and will not interfere with the country's development and its forward progress," Yanukovych noted, speaking before journalists in Kiev.

Even as the Maidan crisis burned out of control, the president was initially promised by the protest leaders that he would be allowed to serve out the remainder of his term, albeit with reduced constitutional powers, before the revolutionaries, in their impatience, changed their minds.

Epoch of Destruction: Will Ukraine Survive Maidan's 'Achievements'?
Recently commenting on last year's coup in an op-ed for Russian newspaper Argumenty i Fakti, Yanukovych solemnly summed up the 'victories' of the revolution, noting that the promises of EU association have not been realized, while the country's people have "suffered a catastrophic worsening of their quality of life", corruption has only grown, and the oligarchs sponsoring the Maidan have seen their powers grow to immeasurable heights. The former president noted that freedom of speech has completely disappeared, with criticism of authorities becoming a crime. "They ended up fighting so hard for democracy that they ended up damaging democracy itself," the ex-president said. "And, moreover, Ukraine has now found itself in a situation where it is under external control, its present leaders dictated to from the outside on what decisions they should make."

Looking Back at Euromaidan: Who Benefits From Ukraine's Economic Collapse
Yanukovych has not commented on 'what might have been' had he served out the remainder of his term, but his appeal did hint at what he would not have done, which is to launch a war against his own people, which he considers to be "the most terrible crime committed by the new authorities." In his view, in the present situation, "only the process of negotiations, the taking into account of all interested parties can get us out of this impasse." As for the question of how to move forward in repairing a country damaged by war, social and ethnic tensions, explosive crime rates, and a myriad of other political and socioeconomic problems, the president noted that "what's most important is the desire to build, and not to destroy."
000000
Newsfeed
0
New firstOld first
loader
LIVE
Заголовок открываемого материала
Access to the chat has been blocked for violating the rules . You will be able to participate again through:∞. If you do not agree with the blocking, please use the feedback form
The discussion is closed. You can participate in the discussion within 24 hours after the publication of the article.
To participate in the discussion
log in or register
loader
Chats
Заголовок открываемого материала
Worldwide
InternationalEnglishEnglishMundoEspañolSpanish
Europe
DeutschlandDeutschGermanFranceFrançaisFrenchΕλλάδαΕλληνικάGreekItaliaItalianoItalianČeská republikaČeštinaCzechPolskaPolskiPolishСрбиjаСрпскиSerbianLatvijaLatviešuLatvianLietuvaLietuviųLithuanianMoldovaMoldoveneascăMoldavianБеларусьБеларускiBelarusian
Transcaucasia
ԱրմենիաՀայերենArmenianАҧсныАҧсышәалаAbkhazХуссар ИрыстонИронауОssetianსაქართველოქართულიGeorgianAzərbaycanАzərbaycancaAzerbaijani
Middle East
Sputnik عربيArabicArabicTürkiyeTürkçeTurkishSputnik ایرانPersianPersianSputnik افغانستانDariDari
Central Asia
ҚазақстанҚазақ тіліKazakhКыргызстанКыргызчаKyrgyzOʻzbekistonЎзбекчаUzbekТоҷикистонТоҷикӣTajik
East & Southeast Asia
Việt NamTiếng ViệtVietnamese日本日本語Japanese俄罗斯卫星通讯社中文（简体）Chinese (simplified)俄罗斯卫星通讯社中文（繁体）Chinese (traditional)
South America
BrasilPortuguêsPortuguese
NewsfeedBreaking
19:37 GMTThe US Space Force’s Oldest Adversary, Social Media, Roasts Their New Uniforms
19:25 GMTTraffic on Motorway in German Bavaria Halted Due to Armed Hostage-Taking Situation - Reports
19:24 GMTJoe Biden, DHS Chief Upset by 'Horrible' Videos of Border Patrol Dealing With Haitian Migrants
19:24 GMTBiden Believes Footage From US-Mexico Border ‘Horrific’ and Supports Probe
19:15 GMTSoldiers Killed in Galwan Valley Clash With India Now Part of Patriotism Lessons for Kids in China
19:14 GMT‘An Unpredictable Ally’: Does the AUKUS Pact Undermine the Quad's Significance?
19:11 GMTSearch for Fiancé of Gabby Petito, Brian Laundrie, Resumes in Florida Wilderness
18:54 GMTFrench Defenсe Minister Says US Instigating Confrontation With China
18:48 GMTNew ‘Storytelling’ in Skripal, Litvinenko Cases Meant to 'Sabotage' Effort to End Russia-UK Cold War
18:40 GMTTexas Governor Says Biden Has Not Granted Federal Emergency Declaration Over Border Crisis
18:39 GMTWoman Claims US Billionaire Leon Black Raped Her in Jeffrey Epstein’s Townhouse, Media Says
18:29 GMTMigrants Escape After Overtaking Transport Bus
18:08 GMTVolcano Continues to Erupt on Spanish Island of La Palma
17:49 GMT'US Hegemonic System' Has 'Failed Miserably', Iran's Raisi Tells UN
17:24 GMTUSAF Reveals It Has Five New B-21 Strat Bombers in Production, Not Two as Originally Reported
17:07 GMTAncient Pyramid Made From Volcanic Ash Likely Built to 'Calm Earth’s Anger,' Media Says
17:00 GMTDozens Protest Outside UN Headquarters Against US Global Military Engagements
16:43 GMTUS House Democrats Introduce Legislation to Prevent Presidential Abuses
16:35 GMTPalestinians Ready to Renew Talks With Israel If They Show Readiness, Foreign Minister Says
16:31 GMTRussian Embassy in UK Slams Scotland Yard's Approach to Fact-Finding in Skripal Case