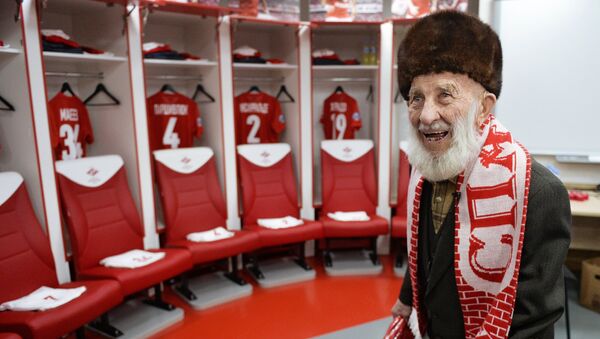 © Sputnik / Vladimir Astapkovich
/
Go to the photo bank
Subscribe
FC Spartak Moscow fans have donated 500,000 rubles to the club's oldest follower, who was defrauded by a man posing as a social worker.

Spartak striker Vyacheslav Krotov handed the money to Fischer during the recording of one of television programs dedicated to the 70th anniversary of the defeat of Nazi Germany in World War Two.

Earlier this month, Spartak's fan club announced the creation of a bank account for transferring money to Fisher.

Representatives of the team said that Spartak will additionally donate money collected from the sale of tickets to the game between Spartak and Kuban Krasnodar, scheduled for April 4.

Last week, an unknown man who introduced himself as a social worker, managed to steal 730,000 rubles from Fischer's house in Kopeisk, a town in Russia's Chelyabinsk region.

Fischer's story became known after he attended a national championship match between Spartak and its Moscow rival Dynamo, which was organized by Spartak's fan club.

Fischer, who attended the match as a guest of honor, opened the event by ceremonially kicking the ball.