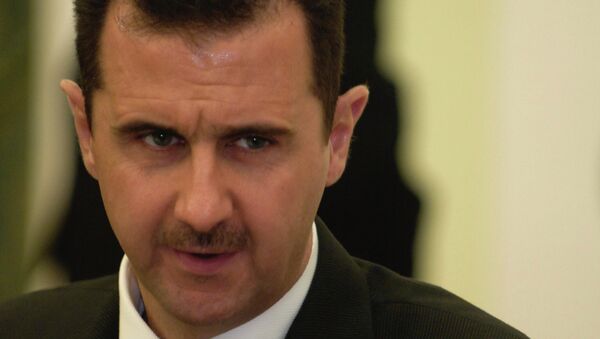 © Sputnik / Sergey Guneev
/
Go to the photo bank
Subscribe
Syrian President Bashar Assad said he hoped that the second round of intra-Syrian talks in Moscow will bring positive results to help end the civil war in the country.

Assad: West Follows Same Scenario in Syria, Ukraine to Weaken Russia
DAMASCUS (Sputnik) – The second round of talks on Syria is set to take place in Moscow April 6-9. The first round of negotiations was held in the Russian capital January 26-29.

"Russia is playing the role of a mediator in the intra-Syrian dialogue without imposing its own opinion. If things go well, I think this dialogue will bring positive results in terms of stabilizing the situation in Syria," Assad said.

He emphasized that the negotiating parties must be "genuinely Syrian" and must express the will of Syrian citizens while taking into account political and religious differences.

"Then the dialogue will be a success," Assad said, adding that it is his wish, as originally suggested by Moscow, that no other countries interfere with the negotiating process.

Syria has been in a civil war since 2011, with government forces fighting several armed groups in the country, including Islamic State extremists.

The January talks in Moscow were the first attempt to resolve the Syrian conflict since January 2014 after a UN-backed conference in Geneva failed to yield tangible results.

According to UN data, some 200,000 people have died amid hostilities in Syria. More than 7.5 million people have been displaced, and almost 4 million have fled the country, according to the United Nations.