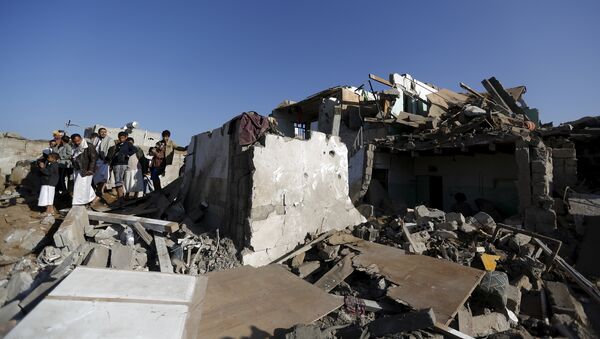 © REUTERS / Khaled Abdullah
Subscribe
According to experts, the military campaign, led by Saudi Arabia and other mostly Arab states against the Houthi militants in Yemen, might escalate the ongoing conflict and enhance the radicalization of local groups.

Yemen Violence Threatens Stability in Gulf Countries - Experts
WASHINGTON (Sputnik) – The military campaign led by Saudi Arabia and other mostly Arab states against the Houthi militants in Yemen might escalate the ongoing conflict and enhance the radicalization of local groups, experts told Sputnik.

“The operation carries many risks — external intervention could lead to a sharp escalation of the conflict and harden attitudes among local factions, making it harder to reach a negotiated end to the fighting,” Oxford Analytica Senior Middle East Analyst Alison Baily told Sputnik on Thursday.

Baily noted that Saudi Arabia faces a risk of being “drawn into a protracted conflict in Yemen with no clear exit strategy.”

If the initial air campaign fails to push the militants back, Bailey explained, the Saudis could decide to launch a major ground offensive, based on their previous intervention against the Houthis in 2009-2010, the expert said.

“This would carry a high risk of failure,” she said.

Baily also said that that maintaining stability in Yemen is important to the wider region.

“It [Yemen] sits at a strategic point on world shipping routes and alongside the world’s top oil producer. Also, Yemen hosts one of the most powerful factions of al-Qaeda which has used the country to plan terrorist attacks on the West,” Baily explained.

Ivan Eland, a defense analyst and director of the Center on Peace and Liberty at the Independent Institute, pointed out that Yemen is a country riven with all kinds of cleavages, including sectarian, tribal and personal power struggles.

“Outside interference from any source is likely to merely stoke the conflict,” Eland told Sputnik. “Increased radicalism may be the end result of all the outside meddling.”

Arab Foreign Ministers Form Unified Military Force in Wake of Yemen Strikes
Middle East Forum Director Daniel Pipes suggested that the Saudi-led military campaign in Yemen could be the beginning of “something very large and long.”

“It marks the beginning of the first Saudi Arabia vs Iran hot war,” Pipes told Sputnik.

Saudi Arabia does not intend to solve Yemen’s problems, he argued, but wants to reduce Iranian influence in the country.

However, Baily argued that the conflict in Yemen reflects ore the struggles of local parties, rather than international ones.

“This is essentially a power struggle between local forces in Yemen, not a proxy conflict between Saudi Arabia and Iran,” Baily said.

On Wednesday, Saudi Arabia launched military operations against the Houthi militants, who currently control large parts of Yemen, including the capital Sanaa. Bahrain, Qatar and Egypt, among other mostly Arab states, joined the Saudi-led coalition.

The military campaign came is a response to a request from Yemen President Abd Rabbuh Mansur Hadi, who is reportedly hiding abroad.

The Houthi militants forced Hadi and his government to resign in late January 2014, dissolving Yemen’s Parliament and declaring the formation of a Presidential Council.