West Must Pay Attention to Ultranationalist Sentiment in Ukraine - Lavrov 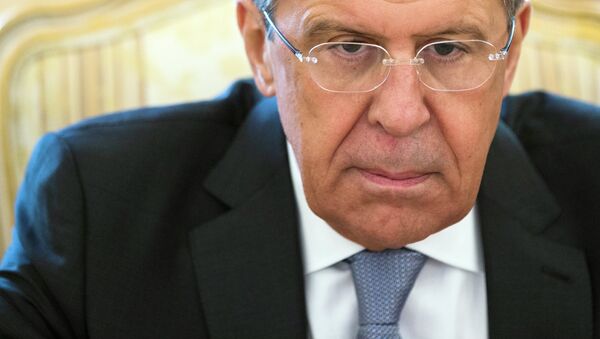 OSCE Monitors, Journalists Come Under Fire in Eastern Ukraine
GUATEMALA CITY (Sputnik) — The Western countries and the Organization for Security and Co-operation in Europe (OSCE) must pay attention to the ultranationalist sentiment in Ukraine's armed forces, as soldiers make threats against Russians working with the OSCE mission, Russian Foreign Minister Sergei Lavrov said during a press conference Thursday at the end of his visit to Guatemala.

"In any case, such threats against Russian OSCE mission employees demonstrate that the ultranationalist sentiment has penetrated even the armed forces. And, in my opinion, the OSCE mission, the European countries and all Western states that favor the Ukrainian authorities, must pay the closest attention to it, as we have paid attention to this threat a long time ago," Lavrov said, commenting on Ukrainian soldiers stating that Russian OSCE mission employees should be murdered.

The Russian top diplomat stated that those who make such statements have to be held accountable.

Moscow has repeatedly raised concern over far-right movements in Ukraine, trying to draw attention of the United Nations, the OSCE and the Council of Europe to the issue.

The process of political settlement in Ukraine should be revived, but Kiev is attempting to slow down the progress, Russian Foreign Minister said.

US Policies in Yemen, Ukraine Double Standard - Lavrov
“Now all the efforts should be directed at restoring political process under the Minsk agreements. There is an obvious slowdown from Kiev’s side,” Lavrov told a press conference Thursday at the end of his visit to Guatemala.

Lavrov added that the Kiev authorities do not regard leaders of the self-proclaimed Donetsk and Luhansk people’s republics (DPR, LPR) as partners in negotiations, while Moscow is insisting that the Contact Group should intensify its work.

“Kiev said it agreed but in reality it sought to slow down the process, only in the past days there has been some progress,” Lavrov said.

Under the Minsk peace accord hammered out on February 12 by leaders of Russia, Ukraine, France and Germany, the warring parties to the conflict in eastern Ukraine should implement ceasefire, withdraw heavy weaponry and conduct prisoner swaps to achieve reconciliation.