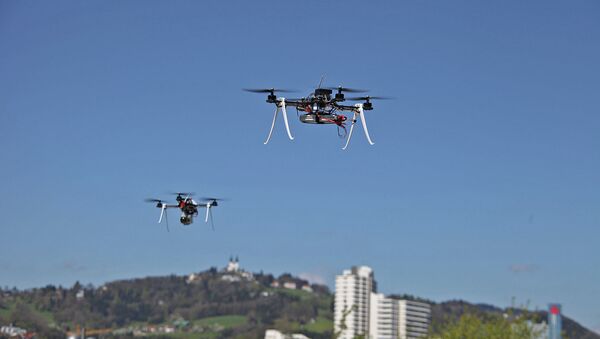 © Flickr / Ars Electronica
Subscribe
In an innovative attempt to combat crime in the United Kingdom, police are seeking to employ Unmanned Aerial Vehicles (UAVS), or drones, to help them on the beat. It’s a move that, perhaps predictably, makes some Brits uneasy.

Drones Might Soon Replace Construction Workers
The Sussex and Surrey police force have been given almost £250,000 by the Home Office to purchase five drones to evaluate how they perform  - specifically, the force wants to know whether they can be used to collect aerial evidence (which may be handy in cases of missing persons,) and investigate areas that could be potentially dangerous to the lives of the officers, the UK Times reported.

This is not the first time Sussex and Surrey has experimented with drones. Drones near Gatwick Airport in West Sussex proved in some instances to be faster, safer, and cheaper than humans for perimeter patrols. The force now seeks to look into broader uses for the technology, to advise other divisions considering drone use, and to draw up a training scheme that could allow other officers to properly pilot drones.

The move comes as regulations for recreational drone use in the UK are tightening. A man in Liverpool was arrested earlier in March for filming Premier League football matches with a drone, and police are investigating an attempt to smuggle contraband into Bedford Prison using a UAV. But as police forces across the country are being pressured to cut costs, UAVs seem a likely route. But, as Engadget reports, until technology has progressed enough for drones to make arrests, they’re not likely to fully replace human forces in the near future.