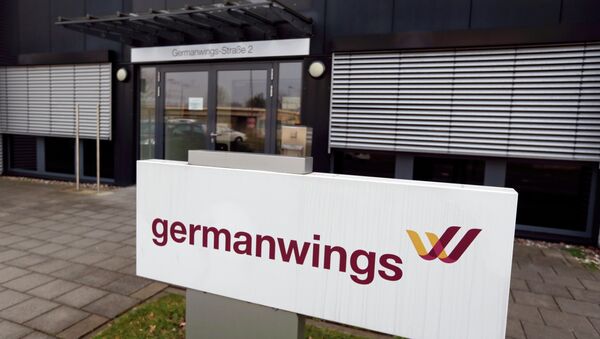 Germanwings Cancels 30 Flights After A320 Crash - Reports
MOSCOW (Sputnik) – The Germanwings airline is warning of flight disruptions and cancellations following the crash of the A320 plane in southern France.

"Following the tragic accident on Tuesday, Germanwings reports occasional flight disruptions within its route network. This is due to crew members, who decided not to operate aircraft today, following the reports on the accident of a Germanwings aircraft with 144 passengers and six crew members onboard," the carrier said in a Tuesday statement.

Earlier, the German Bild newspaper reported citing a Lugthansa representative, that Germanwings, which is a subsidiary of Lufthansa, had to cancel 30 flights after the A320 crash because some air crews had refused to come to work for personal reasons.

First Black Box Found at Airbus A320 Crash Site in French Alps
"We understand their decision," Thomas Winkelmann, Management Spokesperson of Germanwings, said on Tuesday, as quoted by the Germanwings statement, according to which, "some" flights had to be cancelled after the crash.

Germanwings Airbus A320 was heading from Barcelona to Dusseldorf when it crashed in the French Alps on Tuesday morning.

According to French President Francois Hollande, most of the people on board A320 were German, Spanish and Turkish nationals. Australian Foreign Minister Julie Bishop said there were two Australian citizens on the plane.

France's Bureau of Enquiry and Analysis for Civil Aviation Safety has launched an investigation into the crash, the bureau's spokesperson told Sputnik on Tuesday, saying that it was too early to give any detailed information concerning the accident.