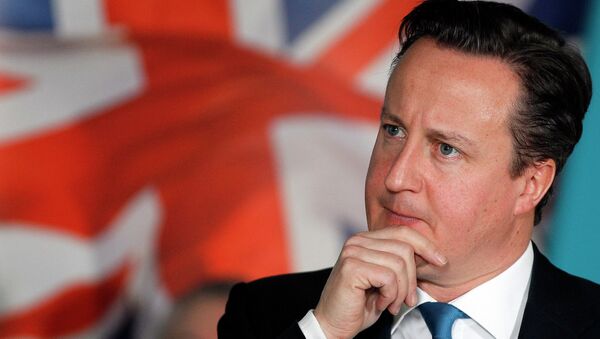 On Monday, David Cameron said he will not serve a third term as British prime minister if his Conservative party remains in power after the general election this May.

Cameron Rules Out Third Term as UK Prime Minister
MOSCOW (Sputnik), Yulia Shamporova – UK Prime Minister David Cameron's announcement that he will rule out a third term if reelected will cause a lot of speculation that could affect the results of the upcoming general election, experts told Sputnik.

On Monday, Cameron said in an interview with the BBC that he will not serve a third term as British prime minister if his Conservative party remains in power after the general election due to take place this May.

"[The announcement] has provoked speculation about when he will stand down, and who his successor might be, in a way that is unhelpful to the Conservatives just before the election," Professor Robert Hazell, Director of the Constitution Unit, told Sputnik.

'Not in a Million Years': Miliband Rules Out Budget Coordination With SNP
A similar move by former Labour Prime Minister Tony Blair, who ruled out seeking a fourth term ahead of the 2005 general election, rendered him "a lame duck" and led to speculation about his replacement, Dr. Jennifer van Heerde-Hudson, political scientist at Constitution Unit, added.

"So much of the political discussion that happened, was not about what Blair would do in that last term, but it triggered the kind of interest of who would succeed Blair and I think that effectively what has happened now," the expert told Sputnik.

Van Heerde-Hudson noted that the prime minister's announcement comes amid much data that suggests that Cameron will not win the 2015 election and will need to create a coalition to continue governing.

"Not to have a majority, to have 2015 general elections and yet making an announcement about your third term, that's not something that we would have expected to hear at this stage of the campaign," she said.

David Cameron Accepts Seven-Way TV Debates in April Ahead of UK Elections
Cameron, the leader of the Conservative Party, has served as UK Prime Minister since 2010.

The UK general election is scheduled for May 7, 2015. British citizens will elect representatives to sit in the House of Commons, the country's lower house of parliament, for the next five years. One party has to win a majority of seats in order to be entitled to form a government.

The two major rivals in the upcoming elections are the Conservative Party, headed by British Prime Minister David Cameron, and the Labour party led by Ed Miliband.

An opinion poll published by the ICM/Telegraph Wisdom Index on Sunday indicated that the Conservative Party will win 32 percent of the vote, slightly ahead of the Labour Party, with 31 percent. Many previous opinion polls, including one conducted by Omnibus in January, indicate that Labour holds a lead over the Conservatives.