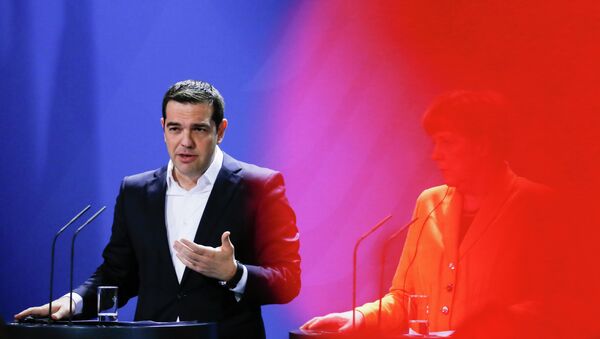 © AP Photo
Subscribe
As Greek Prime Minister Alexis Tsipras met left-of-centre leaders in Berlin, economists predicted that a 'Grexit' would be painful, but ultimately better for both the European Union and Greece, in the long-run.

The short-term effects of a Greek Exit ('Grexit') from the Eurozone would be painful and fast. But, according to Oxford Economics analysts, Greece "might be better off leaving the Eurozone in the long term".

On March 24, Greek Prime Minister Alexis Tsipras met the leaders of Germany's opposition Left and Green parties in a move designed to muddy the waters over Chancellor Angela Merkel's conservatives' distrust towards Tsipras, as he struggled to secure the bailout funds needed to keep his debt-ridden nation afloat.

'Grexit' Would Prompt Even Germany to Leave Eurozone

In the event of a Grexit the drachma would be re-instated, the euro would be abandoned, and the drachma would tumble on world currency markets, calling on the Greek Government to print money as fast as it could to regain confidence.

The only measure of confidence, under the current scenarios, would be for Greece to borrow from the European Central Bank (ECB), or the International Monetary Fund (IMF). However, according to Business Insider, European life support for Greek banks would be withdrawn. Greek banks can currently access emergency liquidity assistance from the ECB, which would be removed if Greece left the euro.

Economists believe that, in the ensuing financial chaos, there would be more unrest and disorder in the streets of Athens and other towns and cities. Analysts at Barclays expect that the sudden currency collapse would "aggravate social unrest". Capital Economics suggests that the drop could be as little as 20%, and Oxford Economics says 30%.

Obligations to creditors such as the IMF, the ECB and the governments of other European economies account for the vast majority of Greece's $500 billion worth of external debt, so these institutions would bear the brunt of foreign losses from a Greek default.

However, foreign bank exposure to Greece amounts to only $46 billion, which is widely dispersed among many countries, so the direct effects of a Grexit on the private sector in other countries should be manageable, at least in theory, according to economists.

In the end, with Greece having only one week to go to sign up to the latest bailout, the Greeks could consider that the musical roundabout of negotiations may have to come to a stop, for the greater good of its people. In Berlin, tonight, Greece is the word.