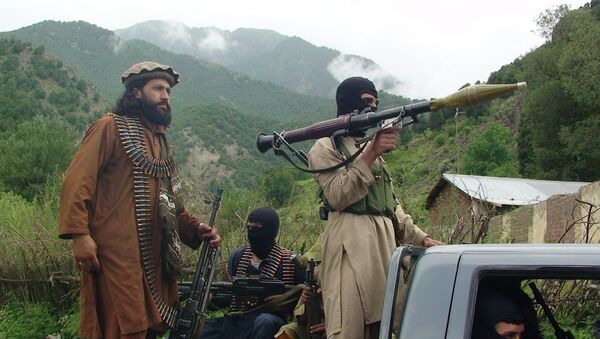 © AP Photo / Ishtiaq Mahsud, File
Subscribe
US Secretary of State John Kerry said that the US hoped that the Taliban would give up violence, sever any ties to any terrorist organization and support the Constitution of Afghanistan in order to participate in the political process.

The Endless War Continues? US to Keep Bases in Afghanistan Open Past 2015
WASHINGTON (Sputnik) — Washington hopes that the Taliban will choose to come to the negotiation table to decide with the Kabul government the future of Afghanistan, US Secretary of State John Kerry announced at a press conference at Camp David.

“If the Taliban want to be part of a political process in a future of Afghanistan and in a peaceful an acceptable way according to the norms and international values and standards of governance they are invited to do so by this President who has set his terms for that negotiation,” Kerry said on Monday. “We hope they will decide to do so.”

Kerry stressed that reconciliation would be the surest way to stability in Afghanistan and the region, and should be Afghan-led and Afghan-structured.

US Drone Strikes in Pakistan Breed Terrorism - President to Sputnik
The US State Secretary also emphasized that the Taliban must give up violence, sever any ties to any terrorist organization and support the Constitution of Afghanistan in order to participate in the political process.

“Within that framework we believe that President and the government of Afghanistan have enormous latitude to work with the Taliban on defining that future. And President Obama is committed to doing everything possible Ghani,” Kerry said.

If the Taliban does not want to resolve the future of Afghanistan through political process, he added, the United States will continue to defend its interests with respect to counterterrorism, and will assist the people of Afghanistan with their aspirations for peace and stability.

Afghanistan is in the state of political and social turmoil, with Taliban extremists redoubling their activities across the country as international troops leave.

The US military maintains some 10,000 troops in Afghanistan dedicated to training Afghan security forces, as well as engaging in limited counterterrorism operations in a new mission called Resolute Support.