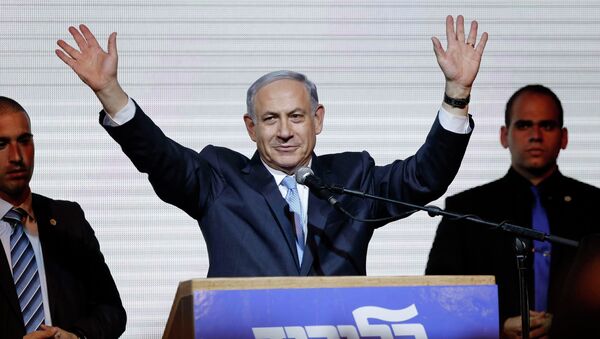 The majority of newly-elected lawmakers supported Benjamin Netanyahu's candidature for the position of Israel's prime minister.

Netanyahu’s New Gov't Likely to Survive Full Term With Parliament Backing
TEL AVIV (Sputnik) — Israeli Prime Minister Benjamin Netanyahu is set to remain in office for a fourth term, after the majority of newly-elected lawmakers backed the incumbent for the top post.

Kulanu became the latest party to back Netanyahu as the next Prime Minister during consultations with the country's President Reuven Rivlin.

"The parties, which are represented in the Knesset with 67 legislators, have supported the nomination of Benjamin Netanyahu for Prime Minister," Presidential adviser Jason Pearlman told RIA Novosti on Monday.

McCain to Obama: Stop 'Temper Tantrum' Over Netanyahu Victory
Netanyahu's Likud party claimed 30 seats in the Israeli Parliament, the Knesset, in last week's elections, but he needed a majority of at least 61 lawmakers to support him before forming a new coalition government.

Four other, smaller parties also gave their backing to Netanyahu, who is expected to be officially appointed by the President on Wednesday.

The biggest opposition party, the Zionist Union, recommended their leader Isaac Herzog, but the 24 seats the party had won in the election were not enough.

The Joint List and Yesh Atid, two other opposition parties in the Knesset, did not nominate a candidate.