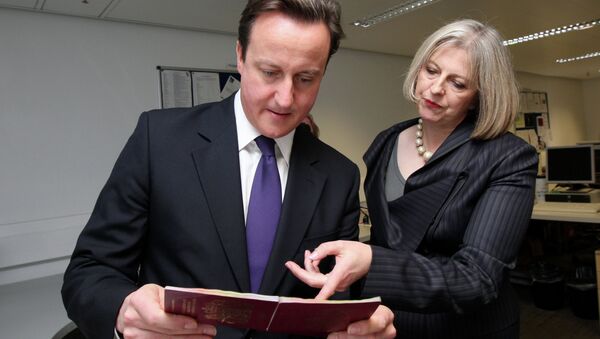 © AP Photo
Subscribe
British Home Secretary Theresa May has called for the "proud" promotion of British values and the implementation of tough new anti-extremist orders as part of the UK's efforts against extremism.

Speaking at an event in central London, Mrs May said Britain needed to "tackle extremism head on" and "pull back against the influence of extremists," who may have gained influence in the UK due to Britain's cultural cringe of not wanting to question minority groups, for fear of being rude.

Mrs May said there were a number of questions regarding the actions of various religious and ethnic minority groups that couldn't be avoided any longer.

The Home Secretary put forward a number of proposals that aim to "tackle the whole spectre of extremism," noting that anti-radicalisation was the responsibility of all of the government's departments.

Theresa May today declared a political war on Britain's Muslims. Dredging the bottom of the septic tank for UKIP dog whistles to blow. Shame

However, May said that the government alone can't combat the threat of extremism in Britain and called for the help of a number of community groups and businesses:

"We must form a new and real partnership between individual people, families, local communities, Internet companies, government and civil society as a whole to defeat the extremists."

As part of the proposals outlined in today's speech, Theresa May identified four ways to help tackle and ultimately reduce the threat of extremism in the UK.

I don't trust Theresa May but there are legitimate reasons to examine the role of Sharia councils in the UK http://t.co/NeViIteD9j

This including gaining a greater understanding of the potential risks in the community, promoting liberal British values and creating a stronger relationship between the government and community groups.

The tough measures put forward by the Home Secretary included the implementation of banning orders and closing orders for any religious preachers and institutions that may be considered to be promoting extremism and radicalisation.

This comes after the Trojan Horse affair which found that some teachers and school governors had tried to impose an Islamic identity on schools in Birmingham, which Mrs May cited as an example of how some radical ideas were trying to infiltrate legitimate institutions in Britain.

Meanwhile, May also called for new measures to be placed on foreign preachers, which would force those coming from overseas to be able to speak English in order to assist with greater controls by authorities.

The issue of Sharia law in Britain was also touched on by the Home Secretary, who stated that a crackdown on Sharia courts was needed to ensure the rights of Muslim women living in Britain.

The new proposals put forward by the Home Secretary are sure to draw criticism from some groups in Britain, who have previously accused the government of trying to suppress freedom of speech and civil liberties.

It's understood the proposals were from the Conservative party and not the ruling Conservative/Liberal Democrats coalition, who have been at odds over similar proposals in the past.

University officials have also been critical of the attempts to silence and ban certain speakers, saying it limits the diversity of opinion available to young Britons.

Meanwhile Labour, Britain's main opposition party, has been critical of the government's approach to counter-extremism, saying that although officials are talking tough, the statistics are less than impressive.

Theresa May can pretend as much as she wants that militant liberal views are not pushing young Muslims to radicalism. #justsaying

It comes after a British woman who tried to join ISIL terrorists in Syria had left for the Middle East, despite being monitored by UK security agencies, and the revelations that the infamous ISIL spokesperson Mohammad Emwazi, also known as 'Jihadi John,' managed to evade security agencies and flee the UK in 2013.