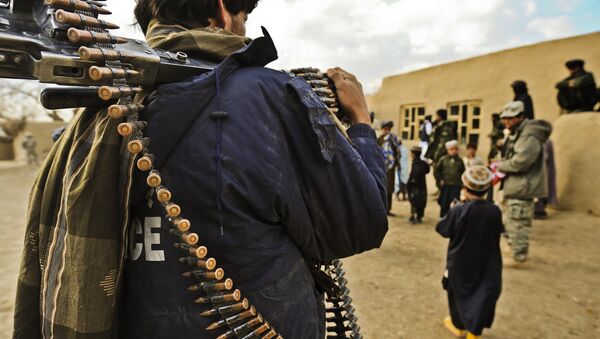 © Flickr / isafmedia
Subscribe
The emergence of bands of militants calling themselves Daesh, an Arabic name for the Islamic State, has led the Hazara, a Shiite ethnic group in Afghanistan, to look for support from other insurgent groups, including the Taliban.

NATO-Led Afghan Mission Cost Germany 8.8Bln Euros
A spate of kidnappings of members of the Hazara people, a Shiite ethnic group in Afghanistan, is thought to have been carried out by militants with Islamic State affiliations, and has led its members to seek agreement with members of rival insurgent groups including the Taliban, according to reports.

The incident follows two similar previous attacks on Hazara: six passengers traveling along the Herat-Farah highway in western Afghanistan were reportedly abducted on Monday 17 by masked gunmen, while on February 24 at least 31 Hazara were kidnapped in the district of Zabul when traveling on the Kabul-Kandahar highway.

The Hazara, who live predominantly in central Afghanistan and are estimated to make up about 20 percent of Afghanistan's population, were the victims of massacres and other human rights violations during Taliban rule in the country during the 1990s and early 2000s. In early March the Taliban, an increasingly fractured fighting force, took the step of issuing a statement denying involvement in last month's kidnapping.

Afghan President Ashraf Ghani to Address US Service Members at Pentagon
Though no group has claimed responsibility for the attacks, police officials in Zabul province told the media they believe that new militia calling themselves Daesh, an Arabic name for the Islamic State, were responsible for the kidnapping. Despite search operations undertaken by Afghan security forces, the whereabouts of those abducted is still unknown.

The spate of attacks and resulting fears of a rise in sectarian violence have even led the Hazara to seek an agreement with Taliban representatives who have been engaged in a battle with Daesh militia. On Saturday, responding to reports that some Taliban commanders who had been fighting the Afghan government were instead changing their allegiance to the Islamic State, or Daesh, Afghan President Ashraf Ghani told reporters that the influence of the Islamic State was not the "physical presence of people from Syria or Iraq. It is the network effect."

"Daesh’s characteristic is that it is man-eating. It swallows its competitors," said Ghani on Saturday. His comments followed those of First Vice-President Abdul Rashid Dostum, who on Saturday urged Afghans to "to stand united" against the threat of the Islamic State in Afghanistan.