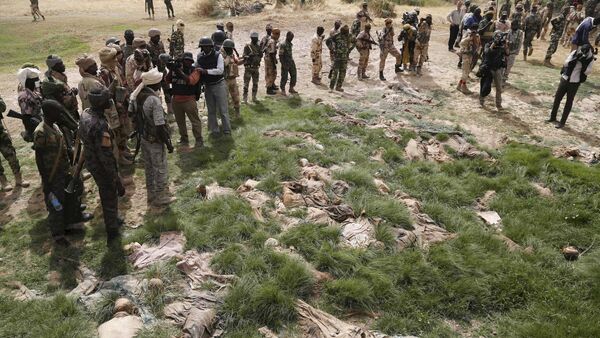 © REUTERS / Emmanuel Braun
Subscribe
Niger and Chad troops have found at least 70 bodies which were dumped near the Nigerian town of Damasak, after it was recaptured from Boko Haram militants.

Nigeria to Retake Boko Haram Territory in One Month - President
At least 70 bodies have been discovered on the outskirts of the town of Damasak in north-eastern Nigeria, after it was liberated by Niger and Chad troops from Boko Haram militants, news reports said.

The bodies, which were partially mummified by the dry desert air, were reportedly scattered beneath a bridge on one of the main roads leading out of the town. Many had their throats slit and some had been decapitated. The victims have yet to be identified.

Chad's military spokesman Colonel Azem Bermandoa Agouna was quoted as saying that "there are about 100 bodies spread around under the bridge just outside the town… this is the work of Boko Haram."

The horrendous discovery came a day after Nigeria's President Goodluck Jonathan told the BBC that all the territory in his country's north that has been seized by Boko Haram can be "retaken in a month".

Twenty-Five Boko Haram Suspects Held by Cameroon Die in Custody
"They are getting weaker and weaker by the day," Jonathan said, referring to Boko Haram, which is seeking to establish an Islamic caliphate in northeast Nigeria.

Apart from Nigeria, troops from Chad, Cameroon and Niger are taking part in an offensive against Boko Haram militants who started to seize territory about a year ago.

Earlier in March, Boko Haram pledged allegiance to the Islamic State, which has captured large areas in Syria and Iraq in the past year.

More than 15,000 people have already been killed as a result of Boko Haram attacks in north-eastern Nigeria as of 2012.