Comet 67P's Speed of Rotation Shows Signs of Slowing Down 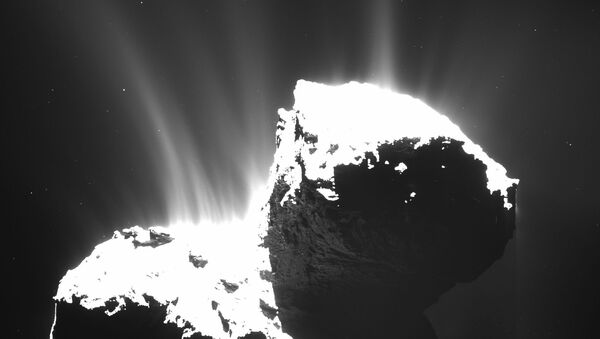 © AP Photo / ESA
Subscribe
International
India
Africa
Scientists have said that Comet 67P, which is being monitored by Europe's Rosetta satellite, has started to slow down.

Science & Tech
Rosetta Mission Reveals Secret Life of Ancient Comet
Comet 67P, which is being monitored by the European Space Agency's Rosetta satellite, is gradually spinning down, according to researchers.

They said that a full rotation of the icy dirt-ball takes just over 12.4 hours, but that mission controllers have detected that this process is extending by nearly a second a day as Comet 67P gets more active.

"The gas jets coming out of the comet — they are acting like thrusters and are slowing down the comet," European Space Agency flight director Andrea Accomazzo said during a session of  the Royal Aeronautical Society in London earlier this week.

He praised efforts by his team to fly Rosetta around the 10-billion-ton body with high precision.

Science & Tech
Be My Valentine: Rosetta Spacecraft Makes Close Pass by Comet 67P
He explained that a system of landmarks on the comet is being used by navigators so as to get a full picture of how the 4-kilometer-wide body is rotating and moving through space. The data are then fed into a model, which helps calculate a trajectory for the Rosetta satellite.

In September 2014, the European Space Agency said that the comet's rotation period was extending by 33 milliseconds per day.

The current spin-down effect comes as the comet moves closer to the Sun and ejects much larger volumes of gas and dust, according to scientists.

Accomazzo said that "it's not going to slow down completely — but this gives you an order of magnitude for the accuracy we're now achieving with the navigation of the spacecraft around the comet."