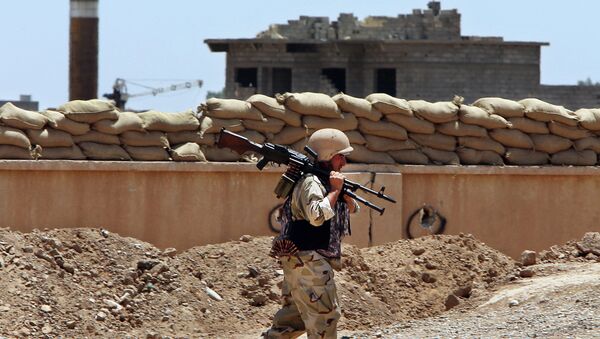 Sean Penn 'Thanks' Dick Cheney for Creating ISIL
Islamic State extremists have released footage of the decapitation of three Kurdish Peshmerga fighters in northern Iraq, and are threatening to kill other captives.

The footage has not yet been independently verified. It shows three victims dressed in orange jumpsuits being beheaded by ISIL insurgents. One of the militants made a statement in Kurdish, in which he addressed Muslim Kurds. He claimed that the Islamic State was fighting not against the Kurdish nation, but against those who teamed up with "the Safavids" and "crusaders" to wage war on Muslims, referring to Iran and US-led coalition forces.

Another militant directly addressed the President of autonomous Iraqi Kurdistan, Masoud Barzani, threatening to kill more detainees if the Kurdish leader persisted in waging war against the Islamic State.

Turkish Professor Appeals to Authorities After his Three Sons Join ISIL
It is worth mentioning that the Kurdish Peshmerga ground forces haved played a key role in the military campaign launched by the US-led coalition against the Islamic State in the Middle East. The Peshmerga militia is fighting the terrorists in both Iraq and Syria, inflicting serious losses on the Islamists. It has also heavily shelled Mosul, ISIL's stronghold, several days ago.

However, despite all the efforts of the US-led coalition, the campaign mounted against the Islamists has not yet proved effective. The Islamic State still controls vast territories in Iraq and Syria, and has withstood massive airstrikes; it has also expanded its influence across the Middle East and North Africa.

The Islamists have already released a series of graphic videos depicting the decapitation of their captives from the United States, Britain and Japan. On February 3, ISIL released a video showing the execution of Jordanian pilot Muath Al-Kasasbeh, who was burned alive by the extremists. Later, on February 15, the Islamic State insurgents beheaded 21 Egyptian Coptic Christians in Libya.