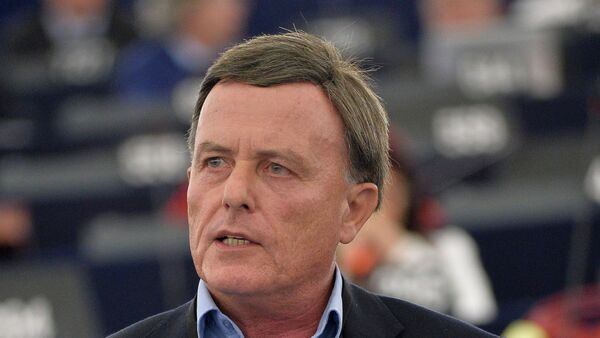 © Photo
Subscribe
Europe should seek to restore a sane appreciation of EU–Russian ties, according to Alfred Sant, a former prime minister of Malta.

EU Faces Economic Difficulty After Anti-Russia Sanctions - Marine Le Pen
MOSCOW (Sputnik), Daria Chernyshova — Due to the hype surrounding anti-Russia sanctions, the European Union is not tackling more vital issues such as countering terrorism, which require an international response, a Member of the European Parliament for Malta told Sputnik Friday.

The European Council agreed Thursday that economic sanctions against Russia will remain in place and will be linked to the implementation of the Minsk agreements. The EU reserved the right to take further measures if necessary.

"Meanwhile, the needed joint action between all Europeans, of course including Russia, to respond according to European values to the new global wave of barbarism/terrorism remains unattended," Alfred Sant told Sputnik.

EC to Make Decision Regarding Anti-Russia Sanctions in Coming Months
Sant, a former prime minister of Malta, said that instead of discussing further sanctions, Europe should seek to restore a sane appreciation of EU–Russian ties.

He added that "both sides know they are hurting each other, and deep down, both sides are asking themselves: but what is the point of all this?"

Since the Ukrainian conflict escalated in April 2014, the European Union, the United States and their allies have imposed a number of economic sanctions against Moscow, blaming it for interfering in Ukraine's internal affairs. Moscow has repeatedly denied its involvement in the Ukrainian crisis.

The restrictive measures imposed on Russia target the energy, banking and defense sectors of the country's economy, as well as certain individuals.