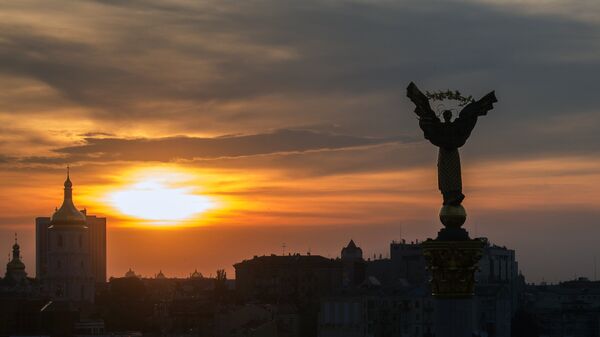 Ukraine Faces Collapse in Foreign Trade
The poll, conducted between March 6th and 16th, found that between 58-68 percent of respondents do not approve of the political performance of the president, the prime minister, or the chairman of the parliament. Prime Minister Arseniy Yatsenyuk rated the lowest, receiving a 68 percent disapproval rating, with only 24 percent "on the whole approving" his performance. He was followed by Rada Chairman Volodymyr Groysman, with a disapproval rating of of 62 percent, while 23 percent approved his work. President Petro Poroshenko rounded out the list, with 58 percent disapproving of his work, while 33 percent of respondents approved.

Ukraine's political parties rated even lower, with 81 percent of respondents saying they don't trust them, 8 percent saying that they do and 11 percent finding it "difficult to say."

When asked which parties they would vote for if snap elections were held in March, 23.1 percent of respondents stated that they would not participate. Meanwhile, 13.2 percent answered that they would support the Poroshenko Bloc, 8 percent chose Andriy Sadovyi's Self Reliance Party, 5.7 percent picked Oleg Lyashko's Radical Party, 5.6 percent selected the All-Ukrainian Fatherland, 5.3 percent picked the Opposition Bloc, and 4.4 percent chose the Right Sector. Given the country's 3 percent requirement for entering parliament, Arseniy Yatsenyuk's People's Front would not pass in these hypothetical elections, polling at just 2.5 percent. Nearly a quarter of respondents, 24.1 percent, said that it was "difficult to say" who they would vote for.

The poll found that 58 percent of Ukrainians "on the whole don't trust" the country's media, with 32 percent answering that they "on the whole trust" their media sources. Ten percent found it "difficult to say."

Hopes for a Better Tomorrow:

European Council to Continue Free Trade Area Discussion With Ukraine
Asked about their assessment of the "political situation in the country," 79 percent of respondents said that they consider the political situation in the country as "on the whole unstable," with 5 percent characterizing it as stable. Another 16 percent characterized it as stable in some areas, unstable in others.

Research & Branding Group's poll was conducted across Ukraine, apart from the war-torn Donetsk and Luhansk regions. 1,501 people participated in the polling, with an estimated margin of error of +-3 percent.