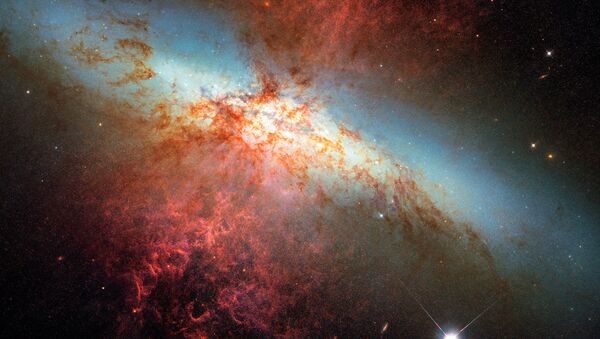 © Flickr / Stuart Rankin
Subscribe
Researchers have released a new study which has revealed a link between supernovae and the formation of planets.

Firework Nebula Brings Us One Step Closer to Unlocking Supernova Mysteries
Scientists have used NASA's Stratospheric Observatory for Infrared Astronomy (SOFIA) to explore how supernovae produce the dust from which planets like Earth are formed, according to a new study published in the magazine Science. Furthermore, they have discovered that the stardust created from exploding supernovae can withstand the extreme shockwaves of stellar explosions as well as reverse shockwaves.

Lau was at the helm of the team who used SOFIA's airborne telescope to take detailed images of an interstellar dust cloud known as Supernova Remnant Sagittarius A East.

The data were used to estimate the total mass of dust in the cloud and detect the radiation emitted by the supernova dust, according to Lau.

He explained that astronomers had already witnessed a supernova's outward-moving shock wave, which produced significant amounts of dust.

Speeding Star to Solve One of Space's Great Mysteries
"The dust survived the later onslaught of shock waves from the supernova explosion, and is now flowing into the interstellar medium where it can become part of the 'seed material' for new stars and planets," Lau said.

He added that the SOFIA data also added to the suggestion that huge amount of dust detected in distant young galaxies could be caused by supernova explosions of early massive stars.

A modified version of the Boeing 747 jetliner, SOFIA is equipped with a sophisticated telescope that has an effective diameter of 2.5 meters at altitudes between 12 and 14 kilometers.

A supernova is a stellar explosion that can briefly outshine an entire galaxy and is capable of radiating as much energy as the Sun. Unlike a regular nova, which releases heavy elements but leaves a dwarf star behind, supernovae explode completely.