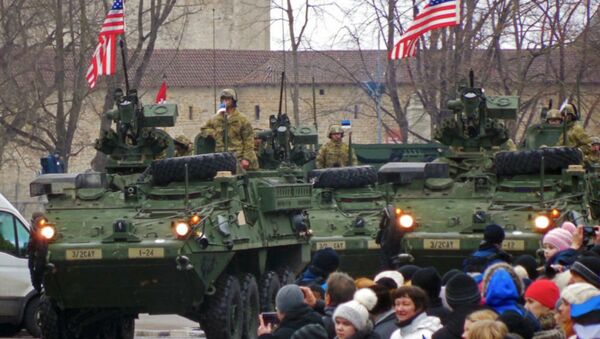 The United States Army will send a convoy of American soldiers and military vehicles through Eastern European countries near Russia’s western border, despite Moscow’s repeated expression of concern over NATO’s expansion of forces in the region.

The 1,100 mile journey, dubbed “Dragoon Ride,” will last from March 21 through April 1 and wraps up months the US Army spent training with allies in Poland and the Baltics.

The convoy will take soldiers from separate training locations in Estonia, Lithuania and Poland and transport them through Latvia, the Czech Republic and finally to their home base at Rose Barracks in Vilseck, Germany.

"It's helped us further develop our understanding of freedom of movement in Eastern Europe," Lt. Gen. Ben Hodges, US Army Europe commander, said in an interview with Defense News and Army Times reporters and editors.

Normally, military vehicles would be shipped back to their home base by rail after such a training mission, not by road in a high-profile convoy.

Months of training exercises meant to serve as “reassurance” from the US and other NATO allies to countries on Russia’s western periphery, Stars and Stripes reported.

"This is what the US Army does, we can move a lot of capability a long distance,” Hodges said. “I've been watching the Russian exercises… what I cared about is they can get 30,000 people and 1,000 tanks in a place really fast. Damn, that was impressive."

The US Army flaunted its personnel and equipment last month, too, when it paraded armored personnel carriers and other vehicles through the streets of Narva, Estonia, a border city separated by a narrow frontier from Russia.

The show was a part of the US Army’s participation a military parade to mark Estonia's Independence Day.

NATO defense ministers agreed in February to the creation of six new command posts in Bulgaria, Estonia, Latvia, Lithuania, Poland and Romania, along with an expansion of NATO’s Response Force, a move Russia’s envoy to the alliance said “creates a great risk for Russia,” particularly in the Baltic States, which could become the site of “military confrontation.”